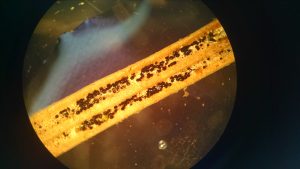 Rhizosphaera needlecast of fir produces rows of round black fruiting bodies on the needles. Photo by Colton Meinecke.

Rhizosphaera needlecast was found on balsam fir in Shawano County, with additional reports from Todd Lanigan (West Central WI) and Paul Cigan (Northwest WI). It causes chlorosis in the needles which drop off prematurely, giving the tree a thin appearance. This disease is related to the Rhizosphaera needlecast of spruce which you may be more familiar with. Literature indicates that it is most common on fir trees in shaded damp areas, or on trees that are under stress from other issues. You will see small black fruiting bodies on the undersides of the needles, although what really stands out is the thin foliage or off-color needles compared to other unaffected trees. 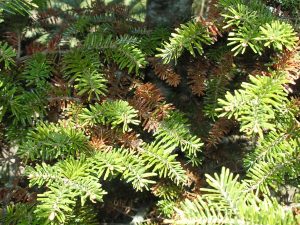 Needles from the previous year have turned brown and will drop off prematurely due to Rhizosphaera needlecast.

Additional info can be found in this pest alert from the Forest Service.