Advancements in wood technologies have expanded the use of wood in design and construction. Mass timber products such as cross-laminated timber (CLT) have emerged and offer opportunities in tall wood construction. The Wisconsin DNR, in partnership with the Wisconsin Wood Marketing Team, Forest Stewards Guild, and the American Institute of Architects, will host a seminar on September 20, 2017 in Madison, Wisconsin to highlight wood-based construction, mass timber products, applicable building codes, and case studies on how wood technologies can be a sustainable, cost-effective solution for tackling modern design needs. The event will feature a tour of “The Crossroads” located on the Promega campus, showcasing an innovative mix of glulam and cross-laminated timber.

Architects, engineers, designers, developers, general contractors and others interested in wood design are encouraged to attend this informative seminar to be held at the Promega Corporation’s BioPharmaceutical Technology Center (5445 E. Cheryl Parkway, Madison, WI 53711).  The registration fee of $30 ($15 for students) includes lunch and refreshments.  Visit the event webpage for online registration and additional information. 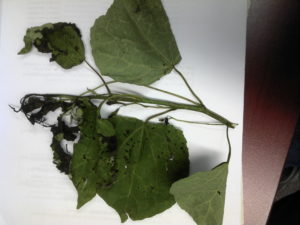 The pathogen rapidly kills expanding terminal and lateral shoots, causing shoots to wither and droop. It also causes leaf necrosis, appearing as black circles of varying sizes, necrotic curling at the margins, or complete leaf death. The disease is most damaging to seedling and sapling aspen, where it can reduce height growth and cause temporary stem crooking as lateral shoots are released and compete for apical dominance.  Disease control is unnecessary in a forest setting. 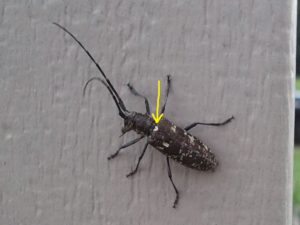 Our native pine sawyer has a “spot” between the elytra (yellow arrow) that Asian longhorned beetle does not have. They also will appear dusty or pitted.

White spotted sawyer, sometimes called Pine Sawyer, is a native longhorn beetle. It is often mistaken for Asian Longhorned Beetle (ALB). How can you tell the difference between our native beetle and ALB?  First of all, size: ALB is a big burly beetle, while our native sawyer beetle looks slim in comparison. Second, ALB has a very smooth shiny appearance with distinct white spots on black wing covers, whereas our native sawyer beetle will appear pitted or dusty, and the white spots may be less distinct or absent. Finally, our native beetle will have a nice white dot “between its shoulders” where the wing covers meet, and ALB does not have this. 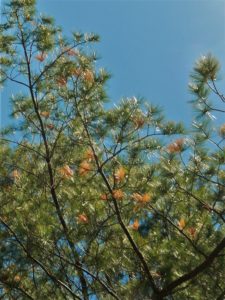 Adult pine sawyer beetles feed on the bark of twigs which can cause branch tip mortality.

Pine sawyer larvae develop in weakened, recently dead, or recently harvested conifers. Larvae first feed in the phloem layer then progress to inner wood. They will pupate within the tree and adults will chew their way out leaving large round exit holes. Adults feed on needles and the bark of twigs. Areas this year which will attract white spotted sawyers include areas of storm damaged pine, and areas of conifer decline due to high water levels, as well as any other areas where conifers are stressed.

If you find a beetle and are unsure whether it’s ALB or our native sawyer, please take some photos to send for identification. 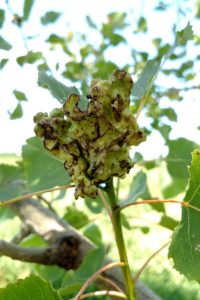 Poplar vagabond aphid feeding on the buds of aspen or cottonwood cause the tree to form a fleshy, hollow gall around the insects.

Galls caused by poplar vagabond aphid form at the ends of aspen and cottonwood branches. The galls are caused by aphids feeding at the tips of twigs. This feeding causes the tree to grow an elaborate structure that the aphids can live inside. One of the galls in the photo is broken open so you can see the aphids inside. This damage does not usually kill the tree, but reduces branch growth because the formation kills the terminal buds. The aphids feed during the spring and early summer within the gall, and then leave to feed on an unknown second host plant. When the aphids leave the gall it will turn brown and woody, and will remain on the tree for several years before weathering off. Adult aphids return later in the fall and lay eggs on the woody gall or in crevices in the bark. Eggs will hatch the following spring and repeat the process. For control, prune the galls prior to egg hatch early in the spring. Because the aphids return to the same trees with the original galls it is common to see a single tree heavily infested while a nearby tree will have no galls at all. I have always seen this problem in trees that are open grown, either along the edge of a stand, along a roadway or fence row, or in a yard. I’m not sure how much of a problem it is in the interior of a stand. 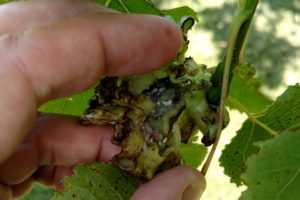 Poplar vagabond aphids, which are covered in a white waxy material, are protected inside the large hollow galls formed by the tree. They suck the trees’ sap. 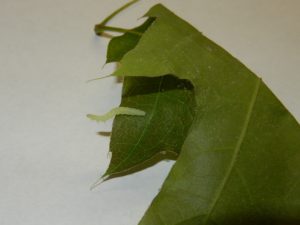 Oak leaf rollers and oak leaf tiers fold over or roll leaves which protect them from predators.

Last month I reported on a location in Marinette where oak leaf tier and oak leaf roller were defoliating oak. Since then I had a report of this same combination of pests causing defoliation near Rhinelander. Typically this defoliation is not severe, but when the leaves are rolled up or folded in half it can make it look like the defoliation is more severe.

Content taken from the Forest Pest Conditions for Wisconsin Annual Reports from 1967 and 1992. 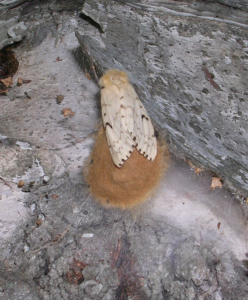 As of mid-July, DNR forest health staff have received reports of adult gypsy moths present as far north as Burnett County. The brown-shelled pupae and white female moths can be crushed with a stick. The remaining caterpillars will also pupate soon, and where the caterpillars are a problem, they can be crushed, drowned in soapy water, or sprayed with insecticide or insecticidal soap. END_OF_DOCUMENT_TOKEN_TO_BE_REPLACED 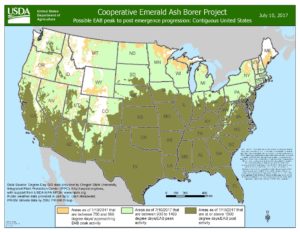 Much of Wisconsin has reached peak emergence of emerald ash borer adults.

EAB continues to be found in new areas. Wisconsin tracks EAB at the municipality or township level. Quarantine counties are shown in tan and infested areas are shown in green on the EAB Detections and Quarantine map below. 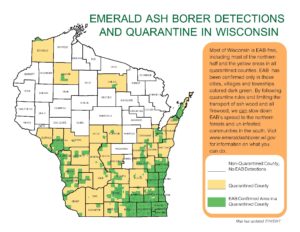 EAB quarantine map. Counties shaded in tan are quarantined for EAB, green areas are townships and municipalities where EAB has actually been identified. 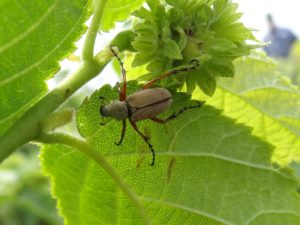 Rose chafers are beetles that can defoliate many plant species. They have fairly long legs, and are a dusty mustard color.

Rose chafer defoliation was reported from Florence, Marinette, Oconto, Vilas, and Waupaca counties this year. Rose chafers are more common in areas with sandy soil where they will lay their eggs. The eggs hatch into white grubs which live in the soil and feed on grass and weed roots. My books inform me that birds can die if they eat adult rose chafers because of a poison in the beetles that affects the heart of small, warm-blooded animals. For information on rose chafer control, check out UW Extension publication A3122.

The last significant defoliation that I noted from rose chafer was in 2012, and before that it was 2005. These beetles feed on a wide variety of plants and prefer blossoms, but they will skeletonize leaves as well. Control is difficult because the adults are good fliers and can easily fly in from neighboring areas to re-infest your freshly sprayed plants.

Japanese beetle populations will emerge in southern Wisconsin first, typically by the first part of July. Some areas of the state have building populations while others, like the Madison area, may have populations that exploded in the past and are more stable now. These insects are occasionally mistaken for EAB because they have some metallic green coloring near their heads.  More commonly people will refer to the multicolored Asian ladybeetles as Japanese beetles, but the ladybugs are ladybugs and Japanese beetles are scarab beetles. 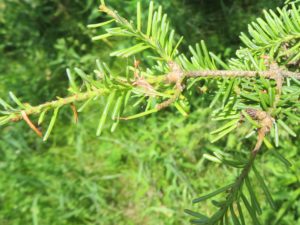 Spruce budworm defoliation is not as noticeable this year, although it is still present as you can see here with many needles missing.

Spruce budworm damage is present this year but in many areas it is less noticeable than in past years. I believe this is due to a couple of things: