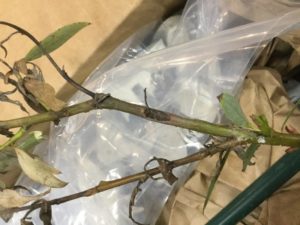 Black canker causes twig mortality and a sunken area on the branch. Photo by Mike Schuessler.

Do you have willow that is looking thin and sad this year?  In addition to some frost damage earlier this year, I’ve checked out several areas where black canker and willow scab are causing defoliation and fine branch mortality.  I’ve noticed this in Brown, Door, Kewaunee, Marinette, Oconto, and Waupaca counties.

Early in my career with the department I recall checking out a willow planting in Manitowoc County that had a lot of black canker killing the fine branches, but since then I haven’t run into it much.  Black canker starts by infecting a leaf but quickly moves into the petiole and into the twig where it causes a small sunken canker. This can cause the twig tip to wilt, shrivel, and die. Willow scab will also cause the twig tips to wilt, shrivel, and die. Willow scab and black canker can often be found affecting the same tree and are more common in years when we have a cool wet spring. 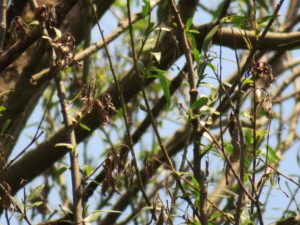 New growth impacted by willow scab and black canker will shrivel and die.

Repeated defoliation of a tree due to black canker or willow scab can significantly impact growth and form because many branch tips will be killed. More information and pictures are available online by Cornell on black canker and willow scab. 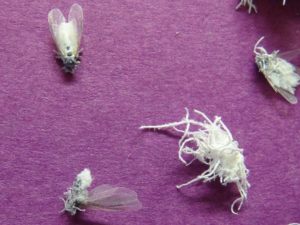 Maple trees with white fluffy, stringy things on their leaves and twigs have woolly alder aphid (Paraprociphilus tessellatus). Populations seem rather high this year. This aphid species requires both alder and maple to complete its life cycle, spending spring and summer on maple and the remainder of the year on alder. While on alder they are a plump, bluish colored aphid covered by white, waxy filaments. They will often be found in a group, forming a solid mass of white fluff on the stems.

When present on maple they are sometimes referred to as maple blight aphid. They don’t usually do any significant damage to either maple or alder but they can be quite noticeable at times because of the large patches of fluff when they congregate in an area.  High populations of these aphids on maple can create enough honeydew (aphid excretions) to create a sticky layer on any objects underneath the maples. Sooty mold can then grow on the sticky layer, so it is recommended to wash off things under these trees on a regular basis. I’ve seen or had reports of woolly alder aphids on maple from Door, Langlade, Oconto, and Oneida counties. 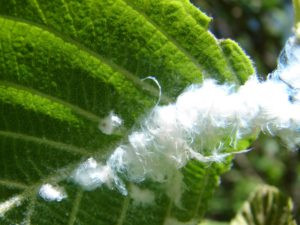 Woolly alder aphids often congregate in large white masses on alder where they will overwinter. 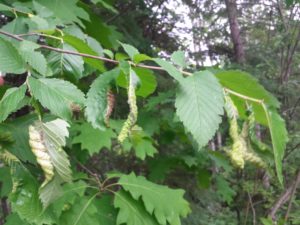 Feeding by woolly elm aphids has become apparent this summer, with light to moderate, but non-threatening levels of foliar damage on American elm.  Woolly elm aphids are just one species among a specialized group of native aphids called woolly aphids.

Learn about the woolly alder aphid in this month’s northeast forest health article. 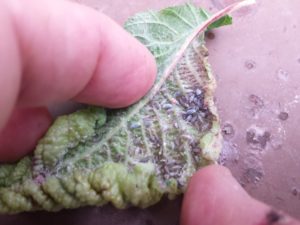 Woolly aphids produce a waxy white covering, giving them a “woolly” appearance and providing a protective barrier from predators.  Having a complex life cycle, most woolly aphids produce multiple clonal generations each year and use two different host plant species, which vary by the particular species of woolly aphid.  Woolly elm aphid uses American elm and serviceberry as its host species.  In early summer, after two generations of female-only clones are produced—each living and feeding for about 1 month—some winged females from the second generation fly to serviceberry where they produce yet another generation of female-only clones that then migrate down to the serviceberry roots to form a root colony.  In early fall, after two more clonal generations of females are produced, some fourth generation winged females emerge from the root colonies and fly back to elm, where they produce a blended generation of both male and females that then mate.  The mated females lay one overwintering egg in a bark crack and die, completing the life cycle. 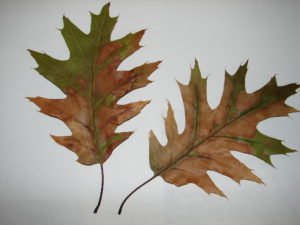 Oak leaves from an oak wilt infected tree. The outer portions of the leaf will be brown or have a water-soaked appearance. Part of the leaf remains green even though the leaf has dropped off the tree.

Trees that were infected with the oak wilt fungus this spring, (whether from overland spread by beetles or underground spread by connected root systems) are beginning to drop their leaves. Leaves can drop anytime between July and September. This wilting and dropping of the leaves happens fairly quickly, and trees can go from looking nice and healthy to having lost most of their leaves within just a few weeks. This year I saw my first wilting oaks on June 28, although in areas further south the leaf drop may have begun earlier. Oak wilt is a non-curable, fungal disease specific to oaks. Once the fungus infects a tree it will begin to spread outward from the roots of the infected tree through grafted roots and into the roots of neighboring oaks, eventually killing the neighboring oaks. In this way pockets of dead oak will be created as each year more oaks die. For more information on oak wilt biology, prevention, and control check out the WI DNR’s oak wilt page.

Firewood from trees that have died from oak wilt will remain infectious for 1 full year (12 months) after the tree has died. There are many areas of northern Wisconsin where oak wilt is not common. Please do not move firewood long distances because you could move oak wilt into a new area. 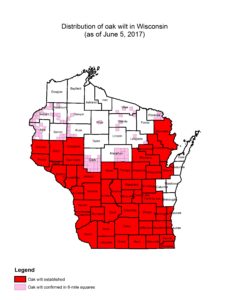 Many northern counties don’t have oak wilt or have only a few known infections. This map shows townships in the north where oak wilt has been identified. In the red counties oak wilt is considered to be scattered throughout the county, although it will not be found in every stand.

The one-day short-course required to gain certification to grade under the Wisconsin Local Use Dimension Lumber Grading system will be offered for Wisconsin sawmill operators on Aug. 22, 2017 and Feb. 27, 2018.

(Visit this page for directions to the DNR office locations.)

END_OF_DOCUMENT_TOKEN_TO_BE_REPLACED

The following article is being reprinted by permission from the Forest Business Network.

DNR’s Forest Products Services Program published articles and information about forest product utilization and marketing, wood processing and drying, innovative wood technologies, and program news in the Wisconsin Wood Marketing Bulletin for more than 30 years. Recently, this newsletter content was merged into the DNR Division of Forestry’s news feed and rebranded as “Forest Products News.” Wisconsin Wood Marketing Bulletin subscribers will continue to receive similar news and information, but this new format will improve the delivery and consistency of content for the Department’s news subscribers. END_OF_DOCUMENT_TOKEN_TO_BE_REPLACED

As part of the DNR Strategic Alignment, the Division of Forestry has consolidated the tax law programs (Managed Forest Law and Forest Crop Law) and associated work into fewer positions under a new Tax Law section.  This section will focus on the tax law programs, allowing us to better meet our customers’ needs.  END_OF_DOCUMENT_TOKEN_TO_BE_REPLACED