If you haven’t already, consider subscribing and please take a moment now to include widnr@service.govdelivery.com in your email address book, so the emails avoid your spam box.

Monthly emails will have Forest Health articles organized by:

The Forest Health News zones have changed too, so check out which counties each zone covers.

END_OF_DOCUMENT_TOKEN_TO_BE_REPLACED 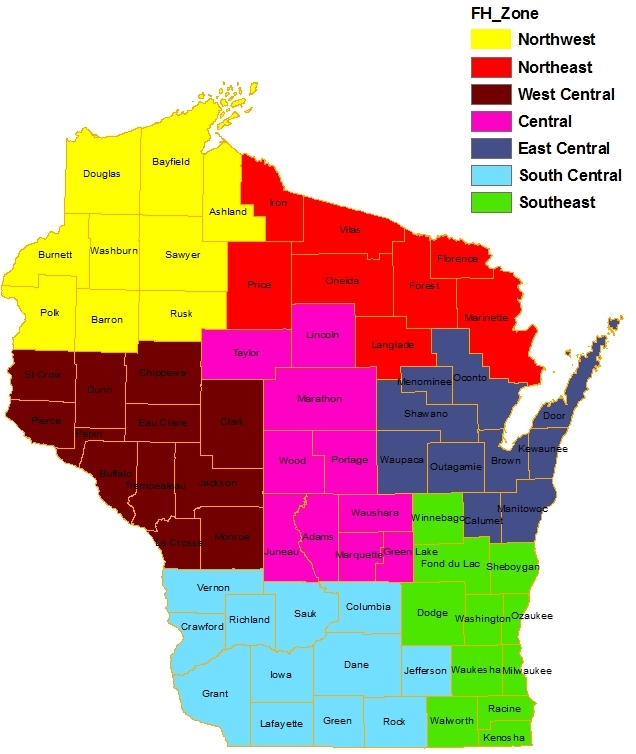 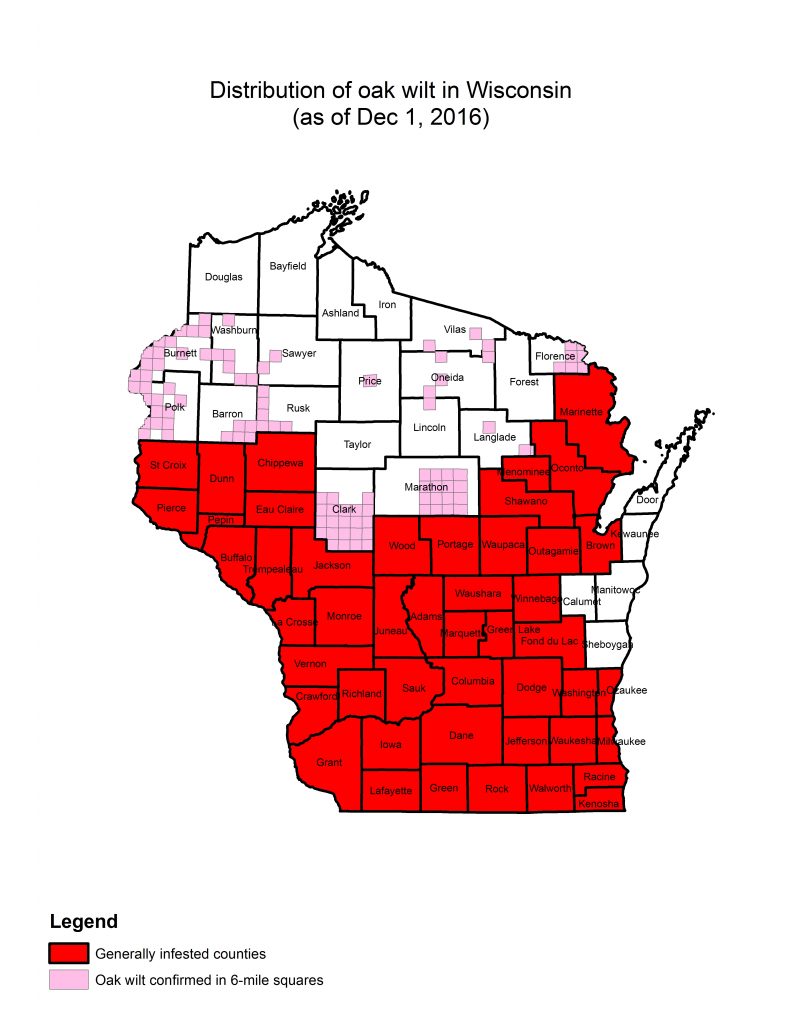 Map of the known distribution of oak wilt in Wisconsin as of December 1, 2016.

Oak wilt, a deadly fungal disease affecting red oaks, was confirmed for the first time in Price County in 2016. In addition to the new county find, the disease was also confirmed in various townships in northern Wisconsin counties where we already knew oak wilt was present.

The map in the oak harvesting guidelines was updated based on the find.

Oak wilt is commonly found in the southern two-thirds of the state, but has been creeping northward. The disease was found for the first time in 2010 in Oneida County, in 2012 in Lincoln, Sawyer, and Vilas counties, in 2013 in Rusk County, and in 2014 in Washburn County. Oak wilt has been confirmed in all Wisconsin counties except Ashland, Bayfield, Calumet, Door, Douglas, Forest, Iron, Kewaunee, Manitowoc, Sheboygan, and Taylor.

Read more about oak wilt prevention in the news release from March 21, 2017: Protect oak trees from oak wilt by waiting until after July to prune.

Homeowners who are interested in reducing gypsy moth caterpillar numbers this summer should consider oiling or removing reachable egg masses well before the eggs begin hatching in the second half of April. Gypsy moth egg masses are tan-colored lumps about the size of a nickel or quarter, and usually contain 500 to 1,000 eggs. The egg masses can be found on any rough or protected surface including trees, houses, firewood piles, bird houses and other outdoor objects. Do NOT scrape the egg masses onto the ground or step on them or break them apart. Many of the eggs will survive and still hatch.

END_OF_DOCUMENT_TOKEN_TO_BE_REPLACED 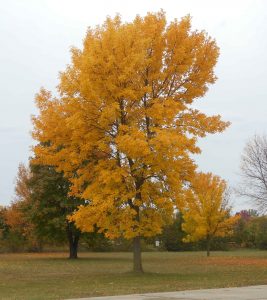 Property owners with susceptible ash trees should consider a number of factors when deciding to treat their ash trees, including financial cost, tree condition and location, the shade a tree provides, its contribution to property values, and aesthetic view. Homeowners should also consider the financial cost of removing a tree that is killed by EAB, and the benefits that a dead tree no longer provides.

END_OF_DOCUMENT_TOKEN_TO_BE_REPLACED

Emerald ash borer (Agrilus planipennis) continues to be found in new areas. Regional Forest Health Updates were not sent during the 2016/2017 winter, so the list below includes new EAB finds from the last few months. Wisconsin continues to track EAB at the municipality or township level; infested areas are shown in green on the map below. If you know you have EAB please contact us with that information so we can verify the infestation and update the maps. If your area:

You can reach both agencies from the menu options when you call 1-800-462-2803. END_OF_DOCUMENT_TOKEN_TO_BE_REPLACED 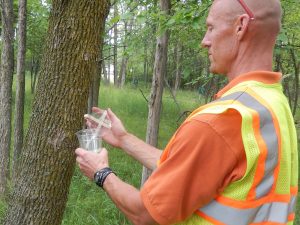 EAB biocontrol releases in Wisconsin will continue in 2017. Wisconsin first released parasitoids to help control emerald ash borer (Agrilus planipennis) in 2011. Our first releases in northeastern Wisconsin occurred in 2016 when we released the two larval parasitoids Tetrastichus planipennisi and Spathius galinae, as well as the egg parasitoid Oobius agrili. These parasitoids are incredibly small, but they find EAB larvae and eggs just fine, helping to reduce the population of EAB. These parasitoids will not stop EAB, but they are an additional tool we can use to slow the population growth. 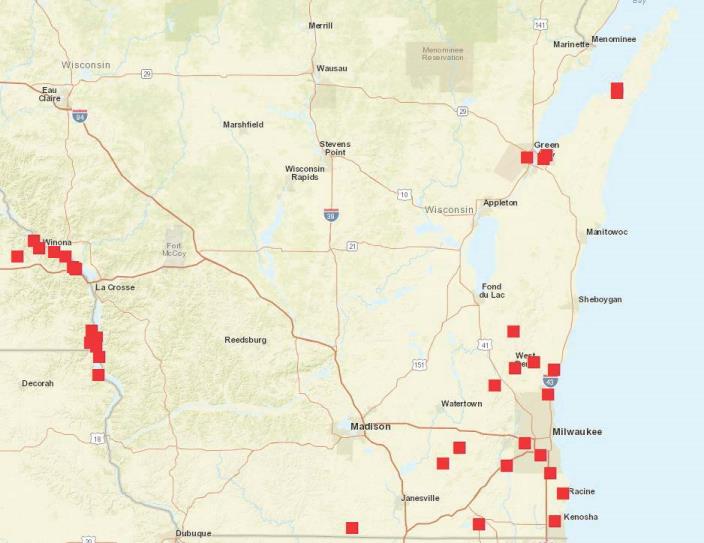 Locations in Wisconsin where EAB parasitoids have been released 2011-2016. Map created by Bill McNee.

Looking for a financial assist in your efforts to control invasive species?

The Wisconsin Invasive Species Council website lists 61 different grant opportunities that are available from Federal and State agencies as well as private foundations. The list is searchable by applicant (tribe, government agency, company, non-profit, individual) and type of invasive organism (plant, animal, aquatic, invertebrate, disease). All but one has a link that takes you to more information or a contact person.

Why not take a few moments to explore these opportunities?

END_OF_DOCUMENT_TOKEN_TO_BE_REPLACED

The University of Wisconsin Extension Pesticide Applicator Training (PAT) program produces a newsletter dealing with information relevant to pesticide rules, regulations, certification, testing and more. The newsletter is called PAT CHAT and it comes out quarterly.

If you would like receive notifications of when the Pat Chat Newsletter is available, send an email to join-patprogram@lists.wisc.edu.