MADISON, Wis. – The Wisconsin Urban Forestry Council recently announced award recipients honoring those dedicated to protecting, preserving and increasing the number of trees that line city streets, fill community parks and beautify neighborhoods throughout the state. The Wisconsin Urban Forestry Council advises the Department of Natural Resources Division of Forestry on the management of urban and community forest resources. END_OF_DOCUMENT_TOKEN_TO_BE_REPLACED

The Wisconsin Department of Natural Resources has released updated guidelines to aid woodland owners and managers in managing ash stands in light of the invasive emerald ash borer (EAB). The guidelines that became effective on January 1, 2019 reflect new research, increased pest detections and the anticipated transition to a statewide EAB quarantine (which occurred in March 2018). 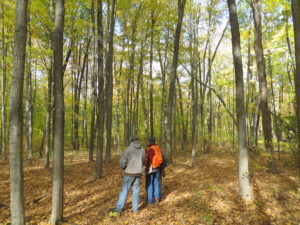 Landowners should work with professional foresters to make management decisions related to EAB on their land.

The silvicultural guidelines are intended to help make informed stand-level decisions regarding management of stands that are not yet infested by EAB and stands that are already impacted by the tree-killing beetle. They should be used along with other materials, including best management practices and other guidance documents, to develop appropriate management plans.

The revised guidelines include recommendations to:

The guidelines also place a greater emphasis on assessing stand and site conditions before making management decisions. The document offers stand management alternatives for both upland and lowland stands, while recognizing that conversion of lowland ash stands to other forest types will be impractical in many cases.

If you would like more information about emerald ash borer or these guidelines, visit the DNR EAB webpage or talk to your regional forest health specialist.

The Wisconsin Department of Natural Resources has released updated guidelines to reduce the risk of introduction and spread of Heterobasidion root disease (HRD) in Wisconsin through preventive stump treatments. The revised guidelines became effective on January 1, 2019, and a professionally designed version will be available soon. Woodland owners are strongly encouraged to work with a professional forester to make management decisions about HRD and preventive stump treatments. 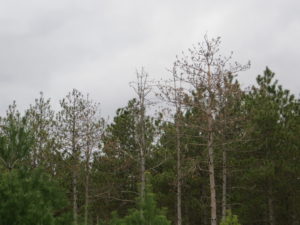 Heterobasidion root disease is one of the most destructive diseases affecting conifers in the Northern Hemisphere. In Wisconsin, HRD is most commonly found in pine and spruce plantations. Infection by the wood-decaying Heterobasidion irregulare fungus kills living tissues and leads to growth loss and tree mortality. Spores landing on a fresh cut pine or spruce stump will infect that stump and root system and spread via root contact to neighboring trees, killing them as it invades their root systems. This pattern of spread creates pockets of dead and dying trees that expand outward. Growth reduction of trees leads to economic losses for plantation owners, and mortality of trees, including seedlings and saplings, has long-term implications for future stand composition and management.

The HRD stump treatment guidelines are designed to help make decisions about the use of preventive stump treatments when harvesting a stand. These treatments limit disease introduction by preventing fungal spores from developing on the exposed surfaces of newly cut stumps. 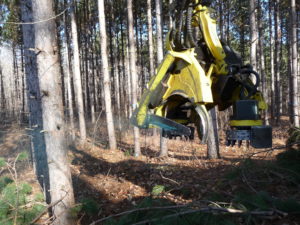 Stump treatments are typically recommended between April 1 and November 30 if a stand is within 25 miles of a known HRD infection site and the stand is more than 50% pine and/or spruce. However, there are other factors to consider when deciding whether to use the preventive stump treatments. Certain situations when you may not need to treat stumps, referred to as “Exceptions” and “Modifications” in the guidelines, consider variables such as economic feasibility, landowner risk tolerance, unexpected weather patterns and future desired stand composition. Highlights of the revised stump treatment guidelines include:

Along with the guidelines, a web-based HRD map viewer has been launched. This interactive map displays confirmed HRD locations and 25-mile and 6-mile radius buffers around HRD locations. The purpose of this map is to help users determine whether a stand is within either the 25 or 6-mile buffers where stump treatments are recommended. You can enter an address or GPS location, turn map layers on and off, and zoom in and out to an area of interest.

If you would like more information about HRD or these guidelines, visit the DNR HRD webpage or talk to your regional forest health specialist. 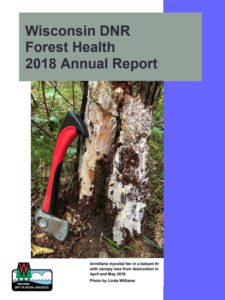 The Forest Health Annual Report summarizes notable impacts pests, diseases and weather on the health of Wisconsin’s forests. The report is a collaborative product written by DNR forest health specialists from around the state. It outlines the damage and spread of both native and invasive pests and diseases during that year and puts these into context of observations from previous years. Management programs and their results are also described. Highlights from the 2018 annual report include:

The 2018 report and others dating back to 2003 are available on the forest health publications page. Historical reports dating back to 1951 are archived and available upon request. Contact Marguerite Rapp at marguerite.rapp@wisconsin.gov for more information on the archived reports. 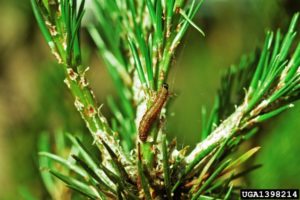 Caterpillars emerge in the spring and feed on host tree foliage. 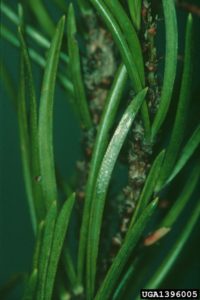 Egg masses are deposited on the tips of host tree foliage.

In Wisconsin, jack pine budworm feeds on all native species of pine: jack, red and white. It is occasionally found on white spruce, but this has only been documented where spruce trees were located near an infested pine plantation.

Jack pine budworm regularly cycles from low to high populations, with outbreaks occurring every 8-10 years on average. During an outbreak, defoliation from these caterpillars can be widespread and lead to growth loss, topkill and tree mortality. 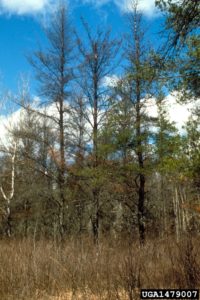 During a jack pine budworm outbreak, defoliation and mortality can be severe.

Wisconsin forests are overdue for an outbreak, with the last one occurring from 2005-2009, but annual surveys indicate that populations of jack pine budworm are still low enough to be undetected. Based on the 2018 surveys, jack pine budworm should not be a problem in 2019.

February is American Heart Month. Get heart healthy the easy way, head outside! Exposure to trees relaxes and restores your mind, lowering your blood pressure and heart rate. This helps to reduce incidences of cardiovascular and lower respiratory diseases. Conversely, tree loss from the spread of the emerald ash borer, and other insects and diseases, is associated with increased mortality related to cardiovascular and lower respiratory diseases. 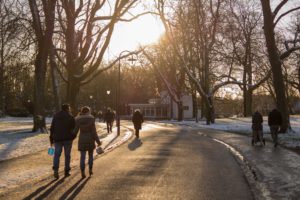 END_OF_DOCUMENT_TOKEN_TO_BE_REPLACED

“Urban forestry and tree care is a great industry to be involved with and something that we all should be proud of. Industry professionals leave a lasting legacy in caring for the trees in our community each and every day, and it’s important that we spread the word and help future generations understand the importance of nature and trees.” END_OF_DOCUMENT_TOKEN_TO_BE_REPLACED

Here is more information on the Forest Action Plan, the timeline, and how the forestry community will be engaged.

If you have questions about your involvement or the Forest Action Plan in general, please contact Amanda Koch at AmandaA.Koch@wisconsin.gov  or at (608) 576-8146.