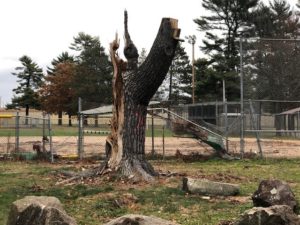 Last October, the Department of Natural Resources’ Urban Forestry program awarded fifteen communities and tribes with grant funding in response to the State of Emergency declared on July 18th, 2019. This declaration triggered the availability of up to 20% of the program’s funds, an amount of $104,920, to affected Wisconsin communities to help lessen the burden of storm-related damages to their urban forest canopy. Each applicant was able to request a maximum of $50,000; however, due to the unprecedented number of applications received, grants were limited to awards ranging from $4,000 to $8,428.19.

The Department submitted a request in December to the Joint Committee on Finance to transfer funds from the forestry emergency reserve. This reserve was created in 2017 as a result of Wisconsin Act 59 for emergency responses to significant fire, disease, infestation, or other natural disasters that could not otherwise be reimbursed by federal funds.

END_OF_DOCUMENT_TOKEN_TO_BE_REPLACED

It is no secret that th 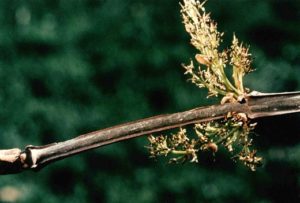 e emerald ash borer (EAB) has a voracious appetite. This pest has eradicated unprotected green and white ash in many communities in southern Wisconsin and can be expected to eventually impact all communities in the state. EAB is also damaging wetland and riverine forests by eliminating green and black ash from these woodlands, which had already become less diverse and resilient from the loss of American elm from Dutch elm disease.

While EAB can feed on all American ash species so far tested, some are less favored than others and thus take less damage from the pest.  Reduced feeding pressure may allow such species to persist in the presence of EAB.  Blue ash (Fraxinus quadrangulata) is one of these less preferred hosts of EAB.  This tree, a native of the Midwest and South, enjoys calcareous soils and has been found growing naturally in southeast Wisconsin. Even before EAB, it was considered a Threatened plant in the state, though it is common in states to the south of us.  It’s an unusual tree but some communities and individuals have planted blue ash across the state.

END_OF_DOCUMENT_TOKEN_TO_BE_REPLACED

Local units of government (LUGs) are eligible to apply for four Knowles-Nelson Stewardship Program grants and two related federal programs administered by the DNR. The annual application deadline is May 1st for the grant programs listed below.

END_OF_DOCUMENT_TOKEN_TO_BE_REPLACED

Do you have a tree inventory from the last five years that you’d want to appear on the Wisconsin Community Tree Map, a compilation of tree inventories from around the state? Or perhaps you already have an inventory there, but want to submit an update? Well, there’s no time like the present to get those submitted to the DNR to appear on the map. The tool is a useful way to showcase your community trees, query different groups (e.g. all large ash trees) and contribute to a better understanding of urban forests in Wisconsin.

END_OF_DOCUMENT_TOKEN_TO_BE_REPLACED 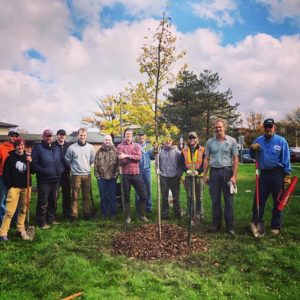 Over the years, the Urban Tree Alliance (UTA), a Madison-based nonprofit, has launched several innovative programs that promote environmental equity. The first of these programs, the Madison Canopy Project, continues to offer free trees to homeowners in selected low-income, low-canopy neighborhoods. Initially funded with the assistance of DNR Urban Forestry Grants, the program now has other funding sources and is kicking off its seventh year.

Why the focus on multi-family residences, you may ask? “Through our work in Madison neighborhoods, we have regularly encountered unmet opportunities for tree planting at thousands of multi-family properties,” explains Jeremy Kane, Director of UTA.

END_OF_DOCUMENT_TOKEN_TO_BE_REPLACED 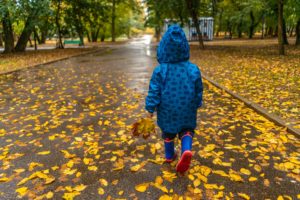 Looking for some hard numbers on how urban trees affect health conditions such as asthma, cardiovascular disease, obesity, and ADHD?

Click on the links below to read the original research studies:

•     An increase of 888 street trees per square mile is associated with a 29% lower rate of childhood asthma. Children Living in Areas with More Street Trees Have Lower Prevalence of Asthma, 2008.

•     Loss of trees to the emerald ash borer is associated with an additional 15,080 deaths from cardiovascular disease and 6113 deaths from lower respiratory disease during the study period (1990- 2007). The Relationship Between Trees and Human Health: Evidence from the Spread of the Emerald Ash Borer, 2013.

END_OF_DOCUMENT_TOKEN_TO_BE_REPLACED 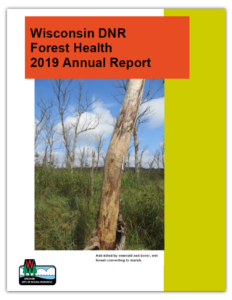 The DNR Forest Health team recently completed the 2019 Forest Health Annual Report summarizing impacts from pests, diseases and weather on the health of Wisconsin’s forests. Highlights from 2019 include:

•   Dramatically increased decline and mortality from EAB in southern WI

Are you seeking funding for an urban and community forestry project with multi-state or national impact? If so, consider applying for the USDA Forest Service National Forest Resiliency Innovation 2020 Challenge Cost Share Grant Program.

The USDA seeks innovative (new, cutting-edge or builds upon existing studies) grant proposals for program development, study, and collaboration that will address urban and community forest resilience and aligns with one or more applicable goals in the National Ten Year Urban and Community Forestry Action Plan (2016-2026):

END_OF_DOCUMENT_TOKEN_TO_BE_REPLACED 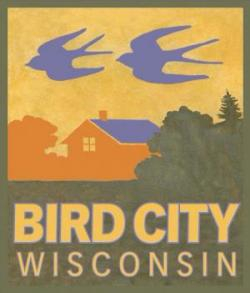 For more information and to apply, please visit this webpage.

Per Act 369, agencies must post new or significantly revised guidance documents for public comment and certify their contents, prior to adoption. The act also requires existing guidance to be republished for public comment. Once finalized, guidance must be posted on the DNR website, contain a certification statement, and the department must permit continued public comment.