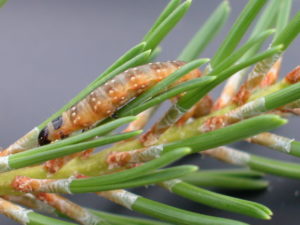 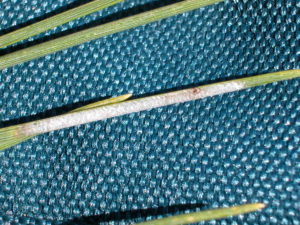 In Wisconsin, jack pine budworm is a pest of jack, red, and white pine. It has rarely been found on white spruce, and in those cases only when the trees were located next to an infested plantation. Jack pine budworm can cause problems in natural stands, plantations, edge plantings/aesthetic strips, yard trees, and anywhere host trees are found.

For more information on management of jack pine in the state, click here. 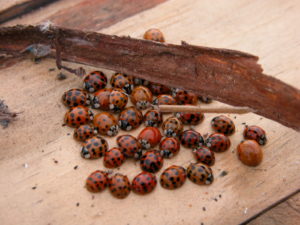 This fall, some areas of the state saw large numbers of ladybugs (specifically multicolored Asian ladybeetles) congregating as fall gave way to colder temperatures.  Box elder bugs, leaf-footed bugs (or western conifer seed bugs), and brown marmorated stink bugs were also seen congregating this fall in areas of the state where they have been found before. These insects are attracted to homes and will attempt to find a way inside to spend the winter in a protected place. The urge to look for an overwintering spot is triggered by the first hard frosts and freezes of the season, but this year we had a fabulous warm-up after a cold spell which allowed the insects ample time to congregate on houses. 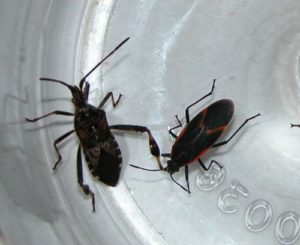 A Western conifer seed bug (sometimes called leaf footed bugs) on the left, and boxelder bug on the right.  These two species also congregate in the fall as they look for warm protected places to spend the winter. Photo: Linda Williams, WI DNR

If you’re having problems with these insects invading your house you can try to “build them out”.  Spraying the exterior of your house with appropriate pesticides to keep them out (which will repel all insects for a time) works well but it’s recommended this is completed by the last week of September or first week of October.  UW Extension offers a fact sheet that gives suggestions for keeping ladybugs out of your home.  When I get calls about ladybugs or box elder bugs inside the home, I recommend vacuuming the critters up, but always avoid squishing, since squishing them will stain whatever they are crushed on.  Be sure to empty vacuum bags that have ladybugs in them as the ladybugs will start to smell after they die.

It’s not unusual for me to hear of folks mixing up multicolored Asian ladybeetles with Japanese beetles … they’re two different critters.  And, yes, multicolored Asian ladybeetles are indeed ladybugs.  Both exotic and native ladybugs feed on aphids and scales which means that they’re beneficial, but only the exotic ones will try to spend the winter in your house or garage.

Heavy infestations of this scale insect were reported on sugar maple twigs in Vilas and Price counties.

The outbreak in the northwestern counties, which began in 1991, exploded this year (Figure 16). Over 114,000 acres of jack pine were heavily defoliated in Douglas, Bayfield, Washburn and Burnett counties. Egg mass surveys indicate extremely high numbers of jack pine budworm. The area of defoliation may increase in 1993. The present defoliation is not expected to cause significant mortality except in Highland Township, but another year of heavy defoliation in the same stands could cause 10-15 percent mortality. In Highland Township, Douglas County, extremely severe feeding produced significant. mortality and top dieback on several thousand acres of jack pine. Most of these stands are being harvested this winter. Moderate to heavy defoliation also occurred in Jackson, Juneau, Eau Claire, Marinette (1,650 acres), Vilas (2,960 acres) and Oconto counties. In Marinette County, 20 acres of 70-year-old jack pine were cut to release young jack pine and white pine. Jack pine budworm was causing severe top mortality. Evidence of budworm in the northern portion of the Monroe County Forest was observed on 35-40 year old jack pine (Sections 4, 9,16, T19N, R3W). DNR foresters have silvicultural guidelines available to manage budworm-prone jack pine stands.”