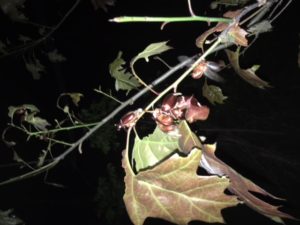 June beetles (also called May beetles) are defoliating oak, aspen and birch trees in several parts of Wisconsin this spring. These beetles are unusual in that they feed on foliage at night – look for defoliation during daytime hours although no insects are present. Although the highest densities of June beetles have been found in Crawford and Grant counties in southwest Wisconsin, forest health staff has also received reports of the insect from northeast and west central Wisconsin.

The biggest concern associated with June beetles is damage from repeated defoliation of oak saplings. While healthy trees can usually recover and put out new leaves after initial feeding damage by June beetles, some oak saplings are being defoliated a second time this year. Repeated defoliation is a major stress on trees that can lead to mortality, so protecting young trees with a contact insecticide may be necessary. In general, older, healthy trees and those exposed to a single defoliation should be able to recover without intervention. However, landowners whose trees have already experienced one defoliation should consider monitoring populations of beetle larvae (immature beetles known as white grubs) in the soil. White grubs feed underground on plant roots and can damage young trees. Insecticides labeled for soil application are available for use when white grub populations are high and there is significant risk to trees.