When people think of wood-based panel products, plywood and oriented-strand board (OSB) usually come to mind. However, a vast array of panel products whose primary building block is wood do not fall under the auspices of plywood or OSB. Before we explore those, it’s important to understand the distinction between “structural” panels and “non-structural” panels.

As the name implies, structural panels are designed to bolster the strength, stiffness and resistance of the items they adhere to. Plywood, generally, is utilized in commercial structures, whereas OSB is more common in residential construction.

Both plywood and OSB function as cladding for roofs, walls and subfloors. In Wisconsin, various plywood manufacturers generally produce hardwood plywood for decorative applications, such as furniture, cabinets, pinblocks for pianos and many others. There are also two OSB manufacturers in Wisconsin that utilize OSB as a base for their siding product.

Alternatively, non-structural panel products are primarily represented by medium-density fiberboard (MDF), particleboard and hardboard. Like OSB and plywood, these panels are prized for their dimensional stability and textural consistency.

MDF
MDF is used extensively by the furniture and cabinet industries. It is produced by breaking down wood into cellulosic fibers and then gluing them into panels compressed under heat to cure the resin, giving the panel its structural integrity.

MDF is a heavy material, weighing approximately 45 pounds per cubic foot. For reference, that’s nearly 4 pounds per square foot of 1-inch-thick material. In comparison to plywood, MDF is inexpensive. It has good machining properties and takes paint very well. However, it does not hold screws and nails particularly well, and care must be taken to avoid splitting the panels when drilling or nailing into its edge. The closest MDF plant is ARAUCO, just over the U.S. and Canadian border in Sault Ste. Marie, Ontario. 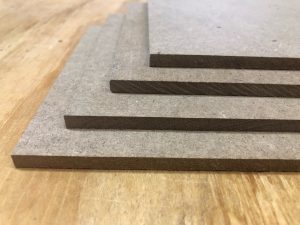 Particleboard
Particleboard, like MDF, is created by combining wood particles with heat and adhesive under pressure to form a panel. The most salient differences between the two panels are the particles’ size variation and the final products’ density. Whereas MDF comprises tiny, uniform particles, particleboard is made up of larger, less uniform particles visible on the edge of a piece.

Particleboard is also less dense and lighter weight than MDF and hardboard. Particleboard is often used as the base material for melamine, vinyl and other artificial veneers. Its dimensional stability and low cost allow for inexpensive components for cabinetry and countertops. Like MDF, particleboard does not hold fasteners particularly well. Its rougher surface texture is generally veneered or covered with another material rather than finish directly applied to it. There is a large particleboard plant in Grayling, Michigan, operated by ARAUCO. Furthermore, Masonite Architectural constructs particleboard door cores at their Marshfield facility.

Hardboard
Hardboard is the densest of all the non-structural panels, generally found in thin panels less than one-fourth inch thick. Hardboard is used for wall paneling, door skins —likely the version most folks are familiar with— and perforated stock, also known as pegboard.

Creating hardboard panels also requires pressure and heat, just as MDF and particleboard, but the process of adhering the panels together is often different. In the making of hardboard, the fibers are essentially “exploded,” freeing up the lignin within the wood to perform the act of adhering the board together.

Current hardboards, however, often have resins mixed in during the panel-forming process to improve some of the physical characteristics, such as moisture resistance and increased strength. For decades, Georgia-Pacific operated a hardboard plant in Phillips, Wisconsin, specializing in decorative panels; however, the plant shuttered a few years ago.

The demand for most non-structural panel products has steadily increased since the Great Recession. Wisconsin is well-positioned to support any growth in the non-structural panel industry. The state has a significant volume of certified wood and millions of acres of sustainably managed forests. Wisconsin and nearby states are also home to large furniture and cabinet firms that utilize substantial volumes of these products. A centrally-located plant would be well-positioned to serve those markets.

A hardboard, MDF or particleboard plant in the state would bolster forest management, logging opportunities, secondary markets, and communities positively affected by the continued success of Wisconsin’s forest products markets. As the recent idling of the Verso mill in Wisconsin Rapids has shown, diversity is critical to a healthy forest products supply chain—a variety of markets makes the industry robust and more capable of weathering hardships that strike one sector.