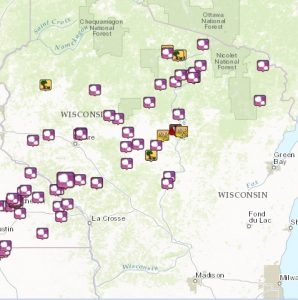 The National Weather Service local storm reports map shows hail was most commonly reported, with some tree damage, and one tornado (west of Wausau).

During the night of April 9-10, 2017 a strong line of storms moved through Wisconsin. Reports ranged from pea sized to tennis ball sized hail, with most stating quarter sized hail. Immediately following the hail, winds picked up and straight line winds took down trees in a number of areas around Oneida and Vilas Counties. The National Weather Service reports that there was a tornado touch down west of Wausau, and reports of tree damage showed up in the National Weather Service’s local storm reporting page.

Damage to trees from hail was most noticeable on the conifers which had needles knocked off, creating a green carpet below the trees. Fine twigs on white pines were damaged by the hail and some fine branch mortality may occur if the twigs were damaged badly enough. Damaged red pine may be more prone to getting diplodia where the twigs were wounded. 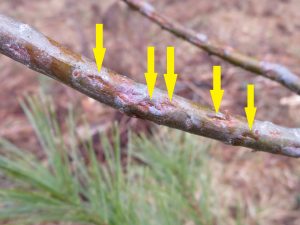 April 9 hail wounds on white pine branches (yellow arrows) appear small but will dry, and the bark will crack further as spring progresses. Some branch dieback may occur. 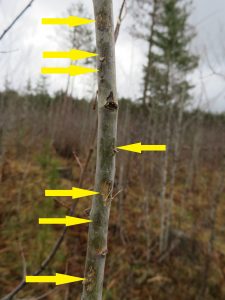 April 9 hail wounds on young aspen and the fine branches of mature aspen appear as scuffed bark (yellow arrows). These will callus over relatively quickly.

Small wounds on young aspen should callus over.