Eastern spruce dwarf mistletoe (Arceuthobium pusillum), is a parasitic flowering plant that can be very damaging to black spruce, although it can also attack other spruces. Occasionally you’ll see it on other species growing amidst spruce such as tamarack, white pine, red pine, jack pine, or balsam fir. 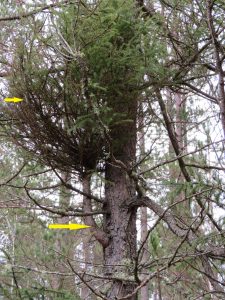 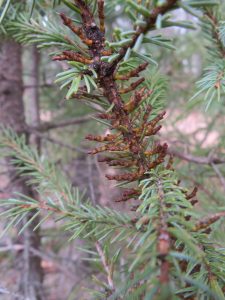 Female flowers erupt from the twigs in spring.

Biology: It has small, flowering shoots that emerge from the spruce branches, but it does not photosynthesize; as a parasitic plant it gets all of its nutrients from the tree. Flowering takes place from late March through June. The seeds are sticky and are forcibly ejected in August or September. Most seeds only travel about 10 feet but they can travel further. The sticky seeds land on a needle of a nearby tree and slide to the base of the needle where they can grow into the twig. For the first few years the infection is not noticeable but after a few years a compact mass of branches called a witches broom, will begin to form.

Impact: Damage from this parasite is due to the mistletoe using the water and nutrients that the tree needs, slowly starving the tree to death. Trees infested with mistletoe will have reduced growth rates, reduced cone/seed production, be more susceptible to drought and attack by insects and fungi, and can die as a result. The brooms created by the mistletoe are the last part of the tree to die.

Management: Management generally involves trying to eradicate the dwarf mistletoe from a stand by removing all infected trees and a buffer around them, including any regeneration that is occurring in the infected areas of the stand.