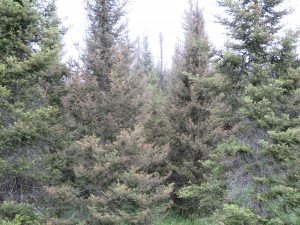 Spruce budworm defoliation is starting to show up in the northern counties as the clipped foliage stuck in the caterpillar webbing turns rusty red. Defoliation this year may be reduced in some areas if the caterpillars were damaged by the multiple storms we’ve had this spring. Let us know where you’re seeing defoliation. The caterpillars should be pupating soon and moths will emerge a couple weeks after pupation. Spruce and balsam fir are defoliated by this pest, which is a native insect with periodic outbreaks.

Outbreaks occur every 30-50 years, and last for 10 years on average. Our previous outbreak ran from 1970-1980. Mature balsam fir and spruce are preferred hosts, although younger balsam or spruce can be defoliated as well. Repeated defoliation can cause top-kill and eventually whole tree mortality. Balsam fir stands, or stands with a heavy component of balsam fir, are often more severely impacted, but don’t let that fool you into thinking it won’t defoliate pure spruce stands. 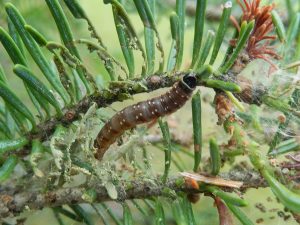 Forest managers should monitor mature balsam fir (60+ years old) and spruce (70+ years old) stands for signs of repeated defoliation and top-kill. After 3 years of significant defoliation (or additional years of lighter defoliation) you will start to see top mortality, and you should think about salvage harvests. If the trees are missing more than 75% of their needles, they should be salvaged. Or, if the stand has been heavily defoliated for more than 3 years including the current year, it should be salvaged. 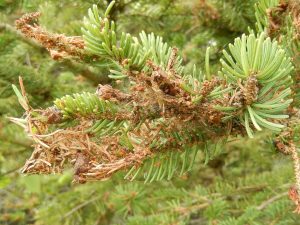 Homeowners with just a few spruce or fir to protect can treat those trees with insecticide.  The biological insecticide Btk will work on the caterpillars, as will general insecticides.  Defoliation is often most severe in the upper portions of the tree, so homeowners should plan accordingly when spraying their trees and be sure the entire tree gets sprayed. Certified arborists have the equipment to help cover the entire tree, even the to-tall-to-reach areas.