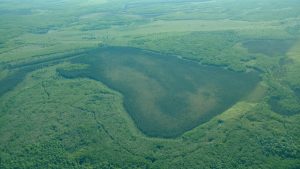 Tamarack defoliation by larch casebearer is evident in northcentral and northeastern Wisconsin again in 2017. The most severe defoliation occurred in Lincoln and Langlade counties, while more moderate defoliation was noted in Waupaca, Shawano and Oneida counties. I saw extensive damage in northern Wisconsin by this insect in 2014 but damage was much more localized and less severe in 2015 and no damage was documented in 2016.

Larch casebearer, Coleophora laricella, overwinters as young caterpillars and is able to start feeding as soon as the weather warms up in the spring. The caterpillars mine out the needles of tamarack causing them to turn brown by late spring. Tamarack trees will typically produce new needles after moderate or severe damage. Caterpillars pupate on the tree in early summer and moths mate and lay eggs in summer. A second round of feeding, which causes additional stress to the trees, occurs by young larvae in summer before they overwinter. Repeated defoliation can weaken the tree, making it more susceptible to mortality from eastern larch beetle.