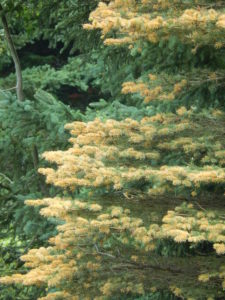 In some areas of the northwoods, the blue spruce are turning pink or orange, and the black spruce and white spruce are turning pale yellow.  What is going on?  This is spruce needle rust, which infects the current year needles.  Problems were noted in northern counties in 2013, 2014, 2015, and now again this year (Forest, Oneida, Vilas Counties).  This fungus enjoys a moist spring, so this year it’s doing well.  As a rust it has an alternate host, probably a shrub in the heath family like Labrador Tea.  The infected needles will drop prematurely.  No treatment “cure” is available for the already infected needles.  Preventative fungicide treatments for yard trees could be done next spring and early summer to protect new emerging needles, but must be done before symptoms appear.  Repeated treatments are necessary as the fungicide must coat the needle to protect it and has to be reapplied after it washes off or weathers off. 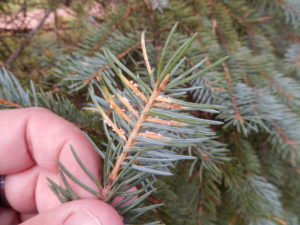