It’s official. January through July 2017 was the wettest Wisconsin has experienced in the 123 years data has been collected. The average across the state was 25.25 inches, which is 7.14 inches above average according to the National Weather Service. 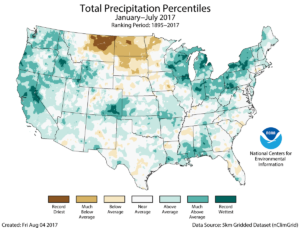 Flood and other storm damage have occurred to forests and urban trees in many areas of Wisconsin. We suspect storm damage from May to July has led to a number of new oak wilt infestations in impacted areas. The wet weather has also led to abundant leaf and needle diseases such as anthracnose. Plentiful precipitation has similarly played a role in insect populations. Japanese beetle larvae thrive with consistent soil moisture and the consistent rain in recent years has resulted in large populations of this pest across the Midwest. In contrast, the wet, humid spring led to another year of high mortality rates for gypsy moth caterpillars from disease.