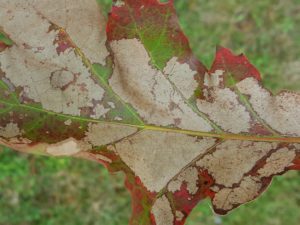 Oak skeletonizer is a tiny caterpillar that feeds on oak by removing just the lower layers of the leaf, leaving the paper-thin upper epidermal layer. 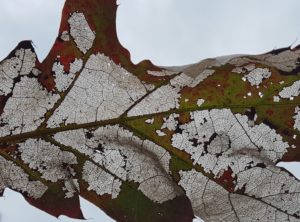 These two pictures are of the same leaf.  In this photo, the leaf is being held up to light to show how there is one very thin layer of leaf left where oak skeletonizer was feeding.

Oak skeletonizer (Bucculatrix ainsliella) is a native insect that defoliates oak in Wisconsin. Damage was observed in most counties in northeast and central Wisconsin. There are two generations per year. Damage from the first generation this year barely showed up at all, but defoliation by the second generation became quite noticeable in late August and September.

Larvae are tiny clear-green caterpillars that feed on the undersides of leaves, leaving the veins and the upper surfaces of the leaves intact, giving the leaves a lacy see-through appearance. Oak skeletonizer spends the winter in the pupal stage. In areas with large populations, Bacillus thuringiensis (Bt) can be sprayed when caterpillars are small, but usually the damage is insignificant to the tree, especially when the majority of the damage occurs late in the season.