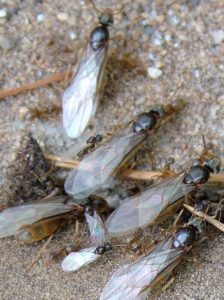 A mass emergence of winged ants.  Photo by Mike Kamke.

On August 29, and again in early September, a mass emergence of winged ants occurred in southern Vilas County and some areas of northern Oneida County. Mass emergences of winged adults are part of a reproductive strategy used by ants to overwhelm predators, in the hope that a few of the new queens will mate and establish their own nests. When weather conditions are right, winged individuals from many ant colonies in an area will emerge and fly away to mate and start their own nests.

Winged ants consist of large winged females and smaller winged males, but many folks that reported these insects were concerned that they were seeing swarms of wasps since most people aren’t accustomed to seeing ants with wings. Once new queens and males fly away from the nest, they will eventually drop to the ground, shed their wings, mate and start a new nest. These events are relatively rare for folks to see as they are very short lived, with the winged ants generally being gone within a day.