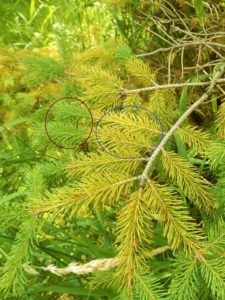 New needles are green (circled in red), and older needles are yellow (circled in blue) on this spruce. Spruce needles that are yellow with no visible fruiting bodies on the needles may be suffering from nutrient deficiency due to constant wet soils this year, or they may have a fungal disease called SNEED (spruce needle drop). Photo by Linda Williams, WI DNR.

In late summer and early fall I had a few calls about younger spruce with yellow needles.  These trees were typically 8-20 years old and were a very yellow color, with new foliage emerging a green color but quickly fading to yellow.  There are two things that came to mind this year.  The first thought is that we’ve had a very wet year.  All year long roots were often in saturated or very moist soil. Consequently. the yellowing could be a sign of nutrient deficiency, specifically nitrogen, due to the saturated soils.  The second possibility is a disease called SNEED (an abbreviation for ‘spruce needle drop’), which I typically see on heavier soils.

SNEED in spruce is thought to be caused by the fungus Setomalonomma holmii.  Pathogenicity of the fungus has not been proven, but it is the primary fungus present on trees with a particular suite of symptoms.  Spruce with SNEED have current year needles that are a nice green color, but older needles will be yellow or yellow/green in color.  Black fruiting bodies will look like pepper sprinkled generously on the twigs of the affected branches.  Old needles, although not showing any fruiting bodies, will drop from the tree prematurely, and repeated years of this will cause the tree to thin, decline, and can lead to mortality.  I’ve seen this primarily in plantations of white spruce on heavy soils, but have also seen it in blue spruce plantations; it’s reported in Norway spruce as well.  I don’t know of any sure-fire chemical options to prevent infection or to help the trees recover.  Management typically involves removing the most affected trees in the plantation, minimizing stress, and minimizing standing water or waterlogged soils where possible.