The winter blues are not a modern phenomenon, but something that struck an existential chord in our ancestors. Luckily there were things growing in the forests which sparked hope in hearts until the sun returned, slowly but surely, at the winter solstice. 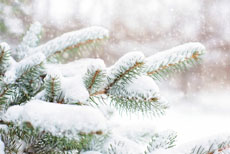 The history and meaning of our most cherished cultural symbols are often taken for granted, and there are few better examples worthy of exploration than those used in winter solstice celebrations, like the Christmas tree, mistletoe and holly. To truly understand the symbolic power of these items, let’s delve into our imaginations.

The light is decaying. The days are shorter and colder; nothing grows. The green canopy of your forested world is now composed of skeletonized reminders of death. But then, through the brambles and brush, through the desolate hues of grey and brown, is a symbol of hope: an evergreen tree.

Through evergreen plants, nature has provided one of the most powerful and eternal symbols in global cultures. For when your very existence rests on the return of the sun and the growth it provides, an evergreen is a reminder that life finds a way through the darkness; that a new day will come.

The symbolic power of plants found their way into ancient festivities. In fact, plants associated with western observances of Christmas have their origins in Roman and Celtic winter solstice celebrations. During Saturnalia, a Roman holiday held just before and during the winter solstice, celebrants decorated homes with spruce, fir and holly, and gave each other gifts. The Roman poet Catullus called it “the best of days”. Two millennia later, Burl Ives crooned that Christmas was “the best time of the year”.

Likewise, Celtic druids ritually cut mistletoe from treetops, doubly symbolic by their midwinter greenness and their proximity to the heavens. Holly was also an important plant in druidic rituals and, together with mistletoe, was known as a mythical parent of the new year.

Over time, the festive use of these and other plants were adopted, rejected and readopted by churches, governments and, later, corporations, ultimately leading to the strange mix of religious, consumer and familial cheer we call the holiday season.

Holiday traditions change across time and between peoples, but the ancient symbol of rebirth remains. Evergreen plants provide a link to the past and a gateway to the future.