Are you wondering how the bitterly cold weather we had in Wisconsin over Christmas and New Year’s affected the insects in your area? You’ll probably be disappointed to learn that, in general, our forest pests handle cold snaps just fine. Here are some examples of what it would take to have an impact on some of our insect pests: 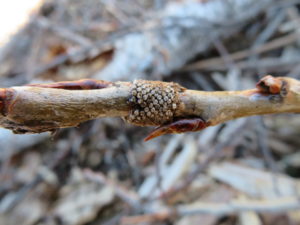 Forest tent caterpillar eggs form a band around an aspen twig. The protective hairs coating the eggs have been removed to show the eggs. Photo: Linda Williams

Forest tent caterpillar: This native insect enjoys our northern climes, so it should be no surprise that it handles the cold quite well. One study found that at temperatures below -45 °F, there was significant mortality. The egg masses of forest tent caterpillars are found near the tips of branches, which are not typically covered with snow.

Spruce budworm: As with forest tent caterpillar, this native insect thrives in the cooler regions of North America and temperatures lower than -40 °F are required to see any mortality.

Emerald ash borer: You may recall in 2014, when we also had bitterly cold temperatures, there was quite a media furor about EAB mortality and some research that was going on in Minnesota. Everyone was hoping EAB would be killed completely in those cold areas. Although some mortality did occur, researchers found that because EAB larvae and pre-pupae are protected under the bark of the tree, temperatures need to be drastically low, or very low for a certain number of days, to see significant mortality. That being said, EAB mortality can occur at temperatures below -13 °F, and, if enough mortality occurs, the spread of the population may be slowed as it has to rebuild from the few individuals that survived the bitter cold. 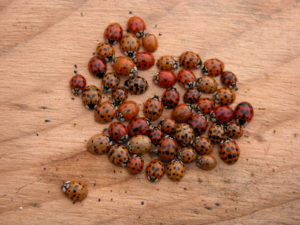 Multicolored Asian ladybeetles cluster together in protected places to wait out the cold. Photo: Linda Williams

Household pests like ladybugs and flies:  Those kinds of insects find protected places to spend the winter (sometimes in your house!), and although there can be significant mortality outside, there will be many that survive the cold just fine.  They often find protected places that are slightly warmer than ambient air temperatures.

Ticks:  Wood ticks and deer ticks overwinter on the ground, under snow, so in areas of the state where there is plenty of snow cover, they’re doing fine so far.  Desiccation is usually a much more important problem during the life of a tick than overwintering cold.

Some insects seem to enjoy winter weather, like snowfleas (also known as collembolans or springtails), and winter cutworm, both of which can be found crawling on snow during warmer winter days.

How can insects survive winter? Different types of insects overwinter during different life stages.  Some insects overwinter as eggs, because eggs are often quite resistant to desiccation, can have “hairs” covering them, are laid in protected areas, or inserted into needles/bark/etc. to give even more protection.  Some adult and larval insects survive winter by supercooling, which is a process in which they eliminate water molecules from their bodies (which, if left behind, could create deadly crystals in their systems).  Supercooling is the equivalent to using antifreeze, allowing the insects to survive very cold temperatures.  One problem insects can have is when there is a warm-up followed by a sudden cold snap, a situation which also causes problems for trees.  When we have steady cold temperatures, insects tend to just hang out like we do, waiting for spring.