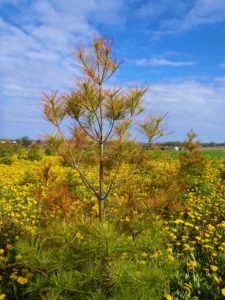 Deep snow during the winter covered the lower branches, protecting them from the drying effects of dry air, wind, and sun throughout the winter, while the top of the tree experienced significant winter desiccation and browning. Photo: Bill Ruff

Recently, several reports of evergreens turning brown have come in from around the state. Spruce trees seem to be the most commonly reported species, as well as being the most severely impacted. We’re also seeing this on white pine, balsam fir, and white cedar, with some areas more heavily impacted than others. Forest health specialists in northeast, central, and southern Wisconsin have received many reports, with reports being submitted in other areas of the state as well. This appears to be a widespread problem: a recent article from the Minnesota Department of Natural Resources’ Forest Health unit outlined the same issue. 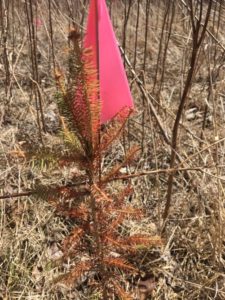 Significant browning of needles due to winter desiccation. The buds and twigs on this tree were still supple, so it may break bud and grow ok this spring, but we’ll have to wait and see. Photo by John Calteux

During the winter, when there is dry air, “warm” windy days, or days with lots of sun, evergreen needles can lose moisture or desiccate. Since tree roots are still frozen in the soil, there is no way for the tree to replenish the water lost, and when the winter stretches on (and on and on) as ours did this year in the north, it can exacerbate the problem of winter desiccation. Although needles will often remain green in winter months while frozen, they will rapidly turn brown once it warms up in the spring. Often, buds are not affected by winter drying, but this spring I’ve seen some areas where buds dried as well as the foliage. This will either kill the branch completely, or the tree will have to send out new buds lower down on branches to put on new growth this spring. 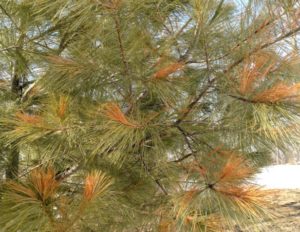 Winter desiccation and browning may be present only in the upper portions of the tree if snow covered the lower branches, protecting them from the dry air, wind, and sun. In some central areas of the state there were periods this spring when there was little or no snow present although the ground was still frozen; entire trees were impacted in these areas.

Don’t be in too much of a hurry to either prune affected trees or write them off as dead. Give them some time this spring to break bud and recover from this long winter (don’t we all need time to recover from the long winter?).

Be sure to read the article this month on  rhizosphaera severely affecting spruce, since it can appear similar to winter drying.