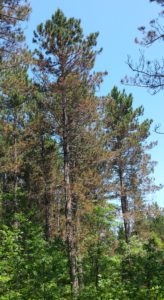 Although no tree mortality is associated with the condition, widespread needle tip browning on red pine has been observed for the second consecutive year across much of the upper Great Lakes region. The condition is heavier in some places than others, but once in a stand or location, tends to be evenly distributed. Needle tip browning is common on the lower half of mature red pine crowns. On two- to three-year-old needles, the outer half to three-quarters of the needles appear reddish brown to straw-colored while needle bases remain green. Black or dark brown necrotic bands and spots are often present on symptomatic needle tips. Lower crown thinning is also common on symptomatic pine. Newly impacted needles will gradually lighten in color from reddish brown to straw-colored as dead needle tips dry out through the growing season. 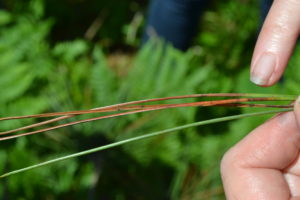 Note: Winter browning on most conifer species, generally a result of winter injury and drying, is also visible this spring, but is primarily abiotic in nature and considered a different issue.  Make sure to see this month’s winter browning article.

The causes and potential health impacts of needle tip browning on red pine were investigated last year by DNR forest health staff and USFS partners, but site evaluations and lab analyses failed to provide conclusive answers. Fungal fruiting structures and spores of the needle cast disease Lophodermium seditiosum were found on some needles, but the pathogen is considered weak and tends to colonize needles that are already dead. Weather conditions in northern Wisconsin from 2012 to 2017 were wetter than normal, creating conditions favorable to the development of numerous needle and shoot blight diseases. However, red pine needles can also be damaged by fluctuating warm and cold weather which leads to needle desiccation, a conspicuous “stand alone” condition of nearly all conifer species this spring. 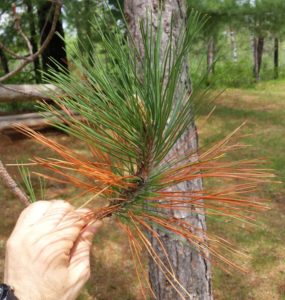 At present, there is not enough information available to determine whether this region-wide episode of red pine needle tip browning is caused by wet weather aggravating one or several needles diseases, weather-related tissue injury, or a combination of both.  It is likely that needle casting in the lower crown associated with this condition will reduce leaf area and productivity and may lead to tree stress over time. Follow-up monitoring this season will hopefully provide additional answers on potential causes and impacts on tree health.

Please report red pine needle browning to your local DNR forester and regional forest health specialist so the extent of this condition can be tracked. This information will help determine if sites should be further evaluated for forest health considerations.