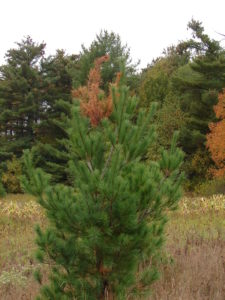 White pine weevil is an insect that can attack and kill the terminal leader on white pine, jack pine, and spruce trees. Terminal leaders killed last year may remain on the tree until spring, although they commonly break off during winter. Adult weevils are now out laying eggs on terminal leaders, just below the expanding buds. After the eggs hatch, the larvae will bore just under the bark of the terminal and feed, moving downward as they progress. As buds expand this spring, they will quickly run out of water and food due to damage caused by larval feeding, and the terminal leader will begin to wilt, curl, and die.

White pine weevils prefer young, open-grown trees with stout leaders. Although the terminal leader dies from the insect’s attack, the tree will recover by allowing one of the lateral branches to grow upwards, taking over apical dominance. This will often leave a noticeable crook in the main stem of the tree.

Natural controls for white pine weevil include parasitic wasps, pitch drowning, and winter mortality of adults. Two silviculture practices commonly used to minimize damage from this insect are 1) regenerating pine in the understory and 2) planting at high densities. The first option causes pines to grow more rapidly upwards, resulting in thinner terminal leaders which are less desirable to the weevils. The second option also causes the trees to grow rapidly as they attempt to out-compete neighbors for sunlight. This causes the terminal leaders to be thinner as the trees redirect their resources into rapid upward growth, and can minimize crooking of the stem when a lateral branch takes over apical dominance. Chemical controls can be utilized to control the adults if damage is significant.