The cherry scallop shell moth is a native insect that defoliates black cherry and other kinds of cherry trees. Typically, moths emerge in June to lay eggs. Caterpillars feed in groups. They form shelters by tying leaves together with webbing, in which they are protected from predators. These webbed leaves eventually turn brown, although the tree is not dead. After feeding by caterpillars is done for the season, the mature caterpillars drop to the ground to pupate and overwinter. Defoliated trees may not send out any new leaves this year.

Because cherry scallop shell moth is a native insect and trees often recover without intervention, management is typically not needed. Collecting caterpillars or pupae and crushing them or placing them in soapy water for a few days may lower population numbers. Keeping affected trees healthy so they are able to recover is usually the only practical solution. 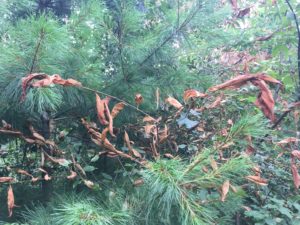 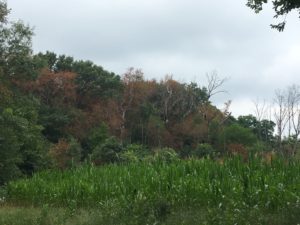 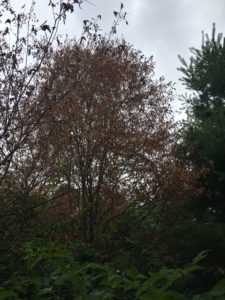