In July, the Wisconsin Statewide Wood Energy Team hosted a free webinar titled, “Wood Energy Systems and Forest Industry Companies: When Are They the Right Fit.” Thirty people attended the webinar. The webinar addressed why wood energy is a good fit for sawmills and other forest products manufacturers. The webinar presenters also covered topics such as the production of heat from wood, combined heat and power that produces heat and electrical power, how wood energy can help with residue management, and what tools are available to look at the feasibility of a project. Some example projects were also highlighted to show how wood energy is benefiting actual companies. For those of you who missed this webinar, please visit the Wisconsin State Wood Energy Team website for educational videos, case studies, tools, and other information to learn more about whether wood energy is the right fit for your home or business.

Wisconsin has 17.1 million acres of forestland covering nearly half of the state and is home to more than 1,200 forest products companies producing a variety of products that we use daily. In recognition of the importance of forest products to Wisconsin, Governor Scott Walker proclaimed the third week of October (October 21-27, 2018) as Wisconsin Forest Products Week.

The proclamation encourages citizens to recognize the many products that come from forests and the people and businesses that work in and care for forests. Forest businesses and organizations are encouraged to host an event or open house to commemorate this event. For ideas or suggestions or to learn more about hosting an event, please contact a member of the DNR forest products team.

A Wisconsin-based real estate development firm, New Land Enterprises, plans to construct a seven-story mass timber office building on a vacant site in downtown Milwaukee. The building was designed by Korb + Associates Architects and would be the tallest of such structures in Wisconsin.

END_OF_DOCUMENT_TOKEN_TO_BE_REPLACED

September is back to school month.  How do you get those kids to settle down and focus after three months off?  The answer is as simple as walking right outside your front door!  Exposure to nature has shown various impacts on students, from improved academic performance and focus, to reduced Attention Deficit Hyperactivity Disorder (ADHD) symptoms.  Research has shown exposure to nature during school hours is positively associated with academic performance, including standardized test scores, graduation rates, and plans to attend a four-year college.  END_OF_DOCUMENT_TOKEN_TO_BE_REPLACED

The Urban Forestry grant reimbursement process can be challenging. All the time and energy that goes into creating a successful project can also create a lot of paperwork, and it is not an easy task to keep everything organized. A new video has been created to help grant recipients navigate this aspect of the reimbursement process and avoid some of the most common mistakes that we see on our grant reimbursement forms. The video covers topics such as documenting cash expenditures, using correct equipment rates, and contacting DNR staff. It is approximately eleven minutes long and can be accessed from the Urban Forestry Grants webpage. END_OF_DOCUMENT_TOKEN_TO_BE_REPLACED

The Wisconsin Urban Forestry Council, comprised of municipal employees, elected officials, nursery operators, and arborists, advises the Department of Natural Resources Division of Forestry on the best ways to manage urban and community forest resources. Every year, the Council bestows several awards to recognize and thank individuals and organizations across Wisconsin for their work and commitment to the trees, plantings, habitat and economic benefits they provide. END_OF_DOCUMENT_TOKEN_TO_BE_REPLACED

The application period for Arbor Day Foundation’s Tree City and Tree Campus USA programs opens September 4th!  You can access information and application materials for these recognition programs from the DNR Urban Forestry website or the Arbor Day Foundation website. Tree City and Tree Campus applicants are encouraged to use the online application form, though hard-copy applications are available. These national award programs recognize efforts to raise awareness of the importance of trees and integrate trees and proper tree care in Wisconsin communities, around utility lines and facilities, and on college campuses. END_OF_DOCUMENT_TOKEN_TO_BE_REPLACED

The front moves and defenses are built, but there’s no doubt which way the war is going, and little doubt what is emerging the victor: a little green bug.

Agrilus planipennis, the emerald ash borer, has harangued and harassed North American forests since the late 1990s, and its journey across Wisconsin continues, county by county, city by city, tree by tree. But this is not its story. END_OF_DOCUMENT_TOKEN_TO_BE_REPLACED 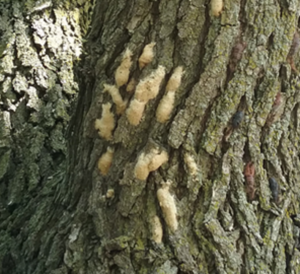 Fall is an excellent time to look for and dispose of gypsy moth egg masses produced by adult moths this summer. Gypsy moth egg masses are felt-like, tan-colored patches about the size of a nickel or quarter that gypsy moth females deposit in protected places. Surveying for egg masses helps property owners predict how high populations of the insect will be during the subsequent spring and summer. Since egg masses usually don’t hatch until April, information gained from fall/winter surveys can be used to mitigate gypsy moth damage before the following season.  END_OF_DOCUMENT_TOKEN_TO_BE_REPLACED 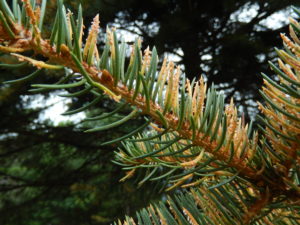