Tetrastichus planipennisi, an introduced, parasitic wasp that attacks emerald ash borer (EAB) larvae, was successfully recovered at two sites in Racine and Waukesha counties in October 2018. This was the first recovery of the natural enemy from Waukesha County. These events indicate that the wasps, released at the same sites in 2015, successfully established and have been attacking EAB larvae since then. This wasp species was previously recovered at release sites in six southeast Wisconsin counties (Kenosha, Milwaukee, Ozaukee, Racine, Walworth and Washington). These releases began in 2011 to reduce EAB populations over the long term, so that some small ash trees might reach reproductive maturity, thus allowing ash to persist on the landscape, albeit as a smaller, less common tree. The tiny wasps do not sting or bite people, and the public is unlikely to ever see them. 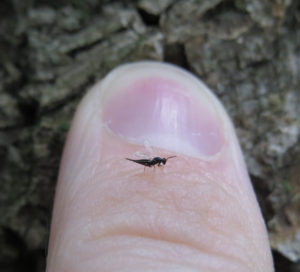 Tree bark samples from the two sites are currently being incubated to look for another parasitic wasp, Oobius agrili, that may be present in EAB eggs. This species has not been recovered in prior surveys and is known to be more difficult to detect than T. planipennisi. Recovery surveys will continue at many locations 2-3 years after wasps are released to allow the populations of introduced parasitoids to increase to detectable levels. 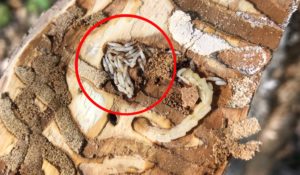