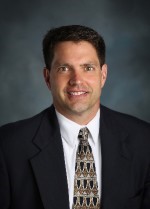 “I have an opportunity to be a voice in the conversation.” As a new member of the Council on Forestry, Jordan Skiff, Fond du Lac public works director and Urban Forestry Council chair, will be an advocate for urban and community forestry, sharing its challenges and proclaiming its benefits. Skiff fills the urban forestry seat vacated by Dr. R. Bruce Allison in December 2016.

The Council on Forestry is a group of individuals appointed by the Governor that was created to advise the governor, legislature, Department of Natural Resources and other state agencies on a host of forestry issues in the state. It is a diverse group of leaders in the forestry community.

Skiff started his career as the public works director for Sparta and gradually became more involved in urban and community forestry. “I am not a professional forester by education or experience,” states Skiff, “but it became one of the hats I wore as part of my job.”

He further developed his career and established his presence in urban and community forestry in 2011 when he joined the Wisconsin Urban Forestry Council (UFC), representing public works and smaller western Wisconsin communities. In the same year he transitioned to a new job as the public works director for the City of Fond du Lac. During his time on the UFC, especially recently as the current chair, Skiff has helped address many challenges in the industry and advise the DNR.

“Between memories of a small community that lacked a dedicated forestry staff or budget, knowing the challenges of EAB and budgets that Fond du Lac faces, having the chance to teach a couple of classes at CTMI every few years, and the great ideas and feedback shared at our quarterly UFC meetings, I feel like I have had the opportunity to learn about, and influence, a broad range of urban forestry issues.”

Skiff put it eloquently when he said, “too often it is tempting to focus only on our specific interests, missing the bigger picture.” With the incredible diversity of each of the councils and the number of resources available, Skiff hopes to foster collaboration both within and between the councils, to expose the bigger picture and bring forward common goals and interests.