From July to September 2018, the Department of Natural Resources, Forest Products Services program conducted an online and mail survey of Wisconsin’s value-added wood using industry. The goals of the survey were to update the Wisconsin Wood Using Industry Directory, assess the impact of the value-added wood industry on Wisconsin’s economy, and develop an understanding of educational and training needs within this sector. Question topics included: demographics, production, wood product purchasing, employment needs, forest certification program enrollment, trade association membership, and educational training needs. In total, 205 responses were received. After removing undeliverable addresses and closed businesses from those contacted, the adjusted response rate for the survey was 51 percent.

One hundred sixty-three firms with a single facility and 27 with multiple facilities responded to the survey. Of responding companies, only 20 had a production location outside of Wisconsin. The majority of respondents (66%) had fewer than 25 full time employees and produced less than $5,000,000 annually. Only 12% of responding companies had more than 100 employees. Large companies (23%) reported sales from $10,000,000 to over $50,000,000. Most respondents identified as millwork manufacturers (66 firms), and architectural woodwork manufacturers (62), followed by cabinet manufacturers (59), furniture (55) and container and pallet manufacturers (54) (Table 1). Some of the respondents indicated that their companies identified as more than one manufacturer type. Other products manufactured included veneer, lath or stakes, boats or ships, caskets, fencing, beehives, birdhouses and feeders, and partitions and fixtures. 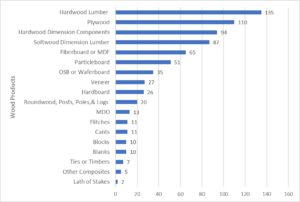 The majority of respondents preferred to purchase kiln dried lumber since only 16% of respondents have dry kilns available at their location. There may be an opportunity to substitute locally grown commercial species such as red maple and red or white pine for wood species that are being purchased outside of Wisconsin such as red alder, southern yellow pine, ponderosa pine.

Residue generation and utilization
Respondents were asked about how they dispose of bark and wood residues generated at their production location(s) given the following categories: residue not produced, sold, given away at no cost, utilized on-site, or disposed. Sawdust and shavings were the most marketed residues with 27% and 24% of respondents selling sawdust and shavings respectively. However, in some areas of Wisconsin, there may be lack of markets available; 25% of respondents stated they dispose and 32% give away at no cost their generated sawdust instead of seeking market opportunities. Potential uses for these residues include wood energy, as well as products such as animal bedding, biochar, and wood composite products.

Survey participants rated the importance of 11 educational training categories using a scale ranging from not important to important (Figure 2). Training in workplace safety, lean manufacturing, process improvement, and marketing/sales were rated highest on the importance scale, whereas softwood shop grade lumber grading, softwood construction lumber grading, hardwood lumber grading, and lumber drying were rated as a lower priority or unimportant training needs among the respondents. Some additional training needs that respondents noted as important to their company that were not listed in the survey options were computer-aided drafting, trade apprenticeships, sawmilling, and timber grading.

These findings align with similar research conducted with wood products producers in the region. For example, a similar study conducted in 2012 with both primary and valued-added wood companies in Virginia and Minnesota found that the industry’s top educational training requirements in both states were quality and process control, process improvement, and maintenance (Espinoza et al. 2012). 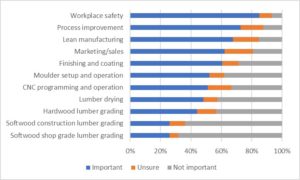 Third party certification and trade associations
Some companies enroll in a third-party forest certification and/or chain-of-custody certification program, such as the Forest Stewardship Council or Sustainable Forestry Initiative, that certifies forestland and products by comparing forest management practices and processes to preset standardized guidelines. Few respondents participated in these programs. Of those that were certified under a program, manufacturers who responded to the survey were more likely to be enrolled in the Forestry Stewardship Council program compared to others.

Conclusion
This study provided an understanding of the economic impact the valued-added wood products industry has on Wisconsin’s economy and forests, along with the market opportunities and challenges manufacturers experience at their respective companies. The study indicated a continued need for educational training for this industry, particularly in the areas of manufacturing and processing. Industry associations, state agencies, and technical colleges should continue to collaborate and provide learning opportunities to help strengthen and grow Wisconsin’s value-added wood products industry.

We would especially like to thank the manufacturers that participated in the study to help us better understand the needs of this segment of the wood products industry.