The Village of Fox Point has a 2.8 acre natural area called Indian Creek Woods (ICW).  Eighty percent of its trees were ash.  This natural area abuts a park, multiple backyards, a village road and has a walking trail going through it.  Safety is a main concern, especially with the ash trees beginning to decline from Emerald Ash Borer (EAB).  It was obvious the trees needed to be removed before they became dangerous to residents and the workers who would remove them.  The removal of all ash and undesirable box elder would result in a major visual change; over 80% of the canopy would be removed.  It was vital replanting was part of the effort. 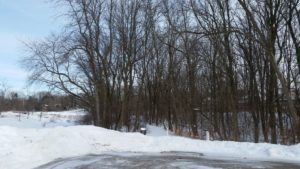 A view of Indian Creek Woods before ash removal.

Bids for the removal of ash and boxelder (approximately 250 trees) were solicited in the fall of 2018.  Not only were the trees to be cut down, but the wood was to be removed from the site as well.  Three bids were received, with the lowest bidder being selected.  The work began in January 2019.  It took approximately two weeks for the contractor to finish the work.  They used tracked skid-steers with shears for most of the removals, while the largest diameter trees were felled after smaller surrounding trees had been removed.  Although most of the woods is on a ridge, the lowest area is quite wet during the summer.  By performing the work in the winter, this area froze sufficiently to allow access with the tracked equipment.

Replanting was the other half of the project.  Fox Point applied for and received funds to cover a portion of the replanting from Bay-Lake Regional Planning Commission via a multi-planning commission project to pass through Great Lakes Restoration Initiative funds from the US Forest Service.  The Village enlisted the help of the Indian Creek Stewardship Committee, the Fox Point Garden Club and residents in the replanting effort.  Volunteer opportunities were advertised on the Fox Point website and via a letter to surrounding residents which can be found here. Note the letter provided specific information about what potential volunteers would be doing, e.g. “planting can easily be done with a shovel scooping out a few shovelfuls of soil, providing an initial watering from a 5-gallon bucket and spreading woodchip mulch.”  The replanting efforts were completed on two Saturdays in October. This group of volunteers dedicated 60 hours of their time and planted 230 container trees consisting of nine Wisconsin native species. 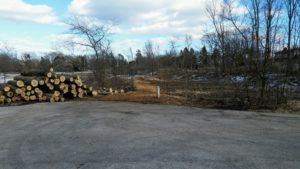 The same view of Indian Creek Woods after ash removal.