White pine branches that suddenly turn red may be a sign of white pine blister rust. White pine blister rust is a fungal infection that creates expanding “dead spots” or cankers on the branches or main stem of host trees. Eventually the fungus grows enough to girdle the branch or main stem and the needles fade from green to pale green to rusty red. Orange, spore-producing pustules erupt around the edges of the canker in the spring. 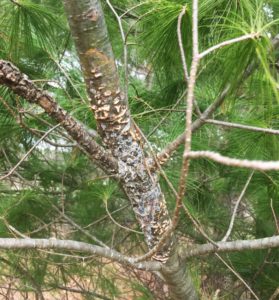 Orange pustules erupt through the bark and around the margins of a white pine blister rust canker. Photo by Jean Romback-Bartels.

White pine blister rust, although specific to white pine, cannot be transmitted directly from one white pine to another. Spores produced on white pine can only infect Ribes (gooseberry) plants, which then produce spores later in the summer that infect white pines if the weather conditions are favorable. Blister rust spores must first infect a needle before growing into the branch or main stem. Since white pine seedlings and saplings often have needles attached directly to the main stem, the fungus can gain entry directly into the main stem of the tree, allowing a canker to grow on the main stem often within feet of the ground. It may take years before damage from a girdling canker causes tree decline and mortality, but it will occur eventually. 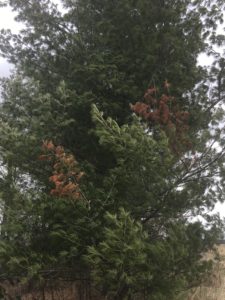 Infected and recently girdled branches are very easy to spot from a distance when the needles turn a rusty red color. Photo by Jean Romback-Bartels.

Pruning infected branches can prevent the disease from growing down the branch and into the main stem, where it could eventually girdle the tree. Branches with cankers can be easy to spot; just look for a pale green or rusty red color that stands out from the rest of the tree. Prune off that branch at the main stem and dispose of it. Removing the lower branches improves air flow around the tree and can help prevent future infections by allowing the needles to dry more rapidly, preventing the fungus from growing into the needle. Young trees that are infected near the ground may not be killed until they are between 6-8 years old. Watch for whole trees that are turning off-color and check the base for sunken areas or areas with lots of pitch flow which could indicate a canker near the base of the tree.