Emerald ash borer (EAB) was first identified in Wisconsin in 2008, although it was likely present in the state for a few years prior to detection. Since EAB doesn’t travel far on its own, some experts think it was unknowingly brought into the state on infested firewood, which is a common introduction pathway for many insects and diseases. The Wisconsin DNR Firewood page has more info on firewood and the insects and diseases that can travel on it.

Since its arrival in Wisconsin, EAB has steadily killed ash trees wherever it has been found. As of the writing of this article, there has been much more ash tree mortality in the southern half of Wisconsin than the northern half of the state where known EAB infestations are still widely scattered.

EAB attacks and kills all of Wisconsin’s native ash trees, including green, white, black and blue ash. Ash species are a component of many forest types throughout the state, and they can also form nearly pure stands in some lowland areas. Public land managers, as well as many private landowners, have been doing sustainable forest management in their woodlots to mitigate the impacts of EAB. On some properties a timber sale is conducted to promote regeneration of other species besides ash, while other sites may require hand planting of various species to replace the ash that dies. The prescription for sustainably managing a forest in response to EAB can vary from site to site depending on forest characteristics, property goals and uses, and tree species currently on the site.

In Wisconsin’s urban areas, after Dutch elm disease decimated the elms beginning in the 1950’s, many municipalities replaced elms with ash. This meant that when EAB appeared in Wisconsin, ash made up a significant proportion of street trees in urban areas, parks and yards all around the state. Many communities struggle with the cost of removing and replacing ash trees that are infested and killed by EAB. Some communities and homeowners have opted to protect their ash trees with yearly chemical treatments. These chemical injections are effective at protecting individual ash trees when they are administered in the correct dosages and frequencies.

State parks face the challenge of removing ash trees before they become safety hazards to park visitors. Park managers must make decisions about which trees to remove using the limited resources they have, so they tend to prioritize the removal of trees in high-use areas, such as campgrounds, along trails, and near parking lots. When ash trees are attacked and slowly killed by EAB, they become dry and brittle and can fail unexpectedly, creating safety hazards to people and property. State park managers conduct regular hazard trees assessments to monitor ash trees for signs of decline and failure, but the sheer number of ash trees in some high-use areas can make the monitoring process a bit overwhelming.

At Big Foot Beach State Park in southeastern Wisconsin, ash tree decline and mortality from EAB rapidly became apparent in 2012, and a quick response was required to maintain the safety of park visitors. An EAB management plan was created by the park managers, and it called for removal of infested trees in high-use zones along roads, along the beach, at picnic areas, and in the campground. Work was completed during the winter of 2012-13, and many ash trees were removed from these high-use areas. In some parts of the park, ash trees were removed and replaced by other trees so they can be enjoyed for generations to come. In other areas, the sites were rehabilitated to prairie or field to provide other sources of recreation and enjoyment for visitors. 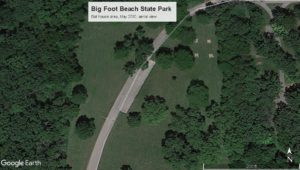 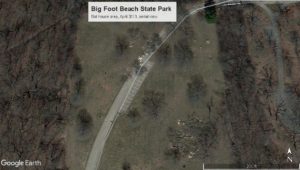 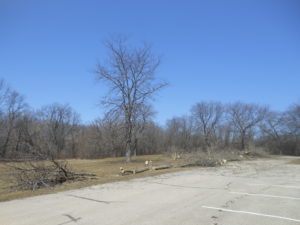 An aerial view from Google Earth (top) and a picture from the ground (bottom) as the ash trees were being removed to improve safety at Big Foot Beach State Park (same location as previous pictures). 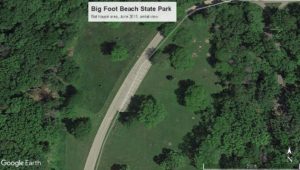 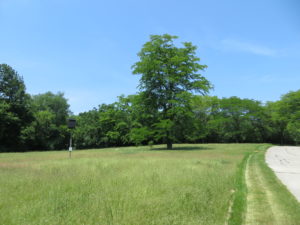 An aerial view from Google Earth (top) and a picture from the ground (bottom) after ash trees were removed and the site was rehabilitated at Big Foot Beach State Park (same location as previous pictures).

Studies have shown how nature improves many aspects of our mental health, including reducing blood pressure, anxiety, depression and stress levels. This is one reason why it’s important to have trees and green space in our urban areas, state parks, state forests and our own yards.

Along with the direct benefits we get from spending time in nature, trees provide other benefits that are equally important but often overlooked. Trees and forests play a critical role in maintaining ecosystem services like removing air pollution, urban heat island reduction, and reducing storm water runoff. Forests are also important in carbon storage and sequestration, nutrient cycling, and wildlife habitat, as well as sources of the wood products that we use and enjoy every day. Emerald ash borer impacts our lives, our trees, and our forests, but thanks to forest managers and the public working together to keep trees on the landscape, the story isn’t all gloomy.

Below are some resources to help you learn more about EAB: