As soon as people from other continents started arriving in Wisconsin, so did the non-native plants, insects and microorganisms that came with them. Most of these non-native species are either beneficial or cause no harm, including well-known examples like honeybees, daffodils and even the bacteria used in cheese production. In contrast, the non-native species that damage native and domestic plants are known as invasive species, and over the years people have developed policies and practices to limit their impacts to native plant communities.

One of the earliest invasive diseases to be recognized was oak wilt, which was first recorded killing oaks in Wisconsin in 1881. Forest pathologists who have studied the origins of oak wilt believe that the disease originated in Central America, which is a center of diversity for oak species. By the 1940s oak wilt was recognized as a localized threat to red oaks in south central Wisconsin, but it wasn’t found in the Northwoods until the last quarter of the 20th century. 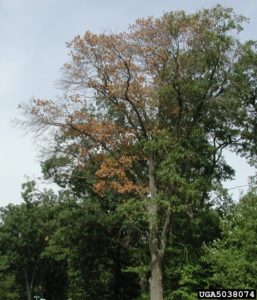 The spread of oak wilt into northern counties is associated with increased home-building in forested areas as well as the transport of infested firewood, but there are some simple practices that can help prevent infections from spreading. Some unintentional introductions happen when travelers from southern counties bring firewood cut from oak wilt-infested trees to the north. Oak wilt spores are produced from the infected wood the spring after the tree dies. The spores give off a sweet smell that attracts tiny beetles who become covered in the sticky spores. When these beetles then fly to a fresh wound on an oak to feed on sap, the spores they picked up from the infected tree can then infect the new tree.

Storms can create open wounds through broken branches and stem failures, but people can also cause wounds through construction activities and tree pruning. Even tiny wounds from nailing in decorations or screws for a hammock can leave an oak open to infection with oak wilt. Limiting firewood movement to no further than 10 miles from its source is one of the best ways to limit the spread of oak wilt and other invasive species. If an injury does occur to an oak tree during the high infection risk period of April to mid-July, paint the wound immediately with tree or latex paint to prevent infection of the open wound. For more information, including how to prevent and manage oak wilt in woodlots, check out the DNR oak wilt webpage. 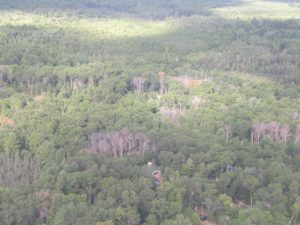 Oak wilt can kill the mature oaks in a local area but fortunately, oaks reach reproductive age before they succumb, so the disease does not threaten the survival of its host species across the landscape or its continued function as a canopy tree of our forests. On the other hand, invasive species such as Dutch elm disease (DED) and emerald ash borer (EAB) have widespread impacts to their host trees and the plant communities where they are found.

The American elm was once the most common tree in many Wisconsin communities, but in the 1960s DED swept through our lowland forests and killed the mature elms that had previously dominated them. Young elm trees are not susceptible to the beetles that spread DED, and since the species can reproduce when young, it persists as a short-lived tree species in disturbed areas. Sadly though, the impacts of DED to mature elm trees means that the species can no longer play its role as a canopy-dominant tree.

Compared to oak wilt and DED, the invasive emerald ash borer (EAB) impacts both the short- and long-term roles of ash species in urban and forest settings. EAB infests and kills green, white and black ash of all sizes down to one inch in diameter, so ash trees are killed before they are large enough to produce seed. Furthermore, since ash seed doesn’t survive more than a year or two in the soil, these trees have been functionally eliminated from lowland forests where EAB has been established for 10 or more years. Combined with the impacts of DED, lowland and riverine forests in Wisconsin are being hard hit by invasive species. Ash and elm were once the dominant canopy species in forests, but due to the impacts of invasive species, these forests are both less diverse and less resilient to pests and diseases.

Invasive pests and diseases often impact larger, mature trees rather than young ones, so their effects are more easily seen than those of invasive plants, which tend to affect the establishment and survival of young trees. Even though the impacts are harder to see at first glance, invasive plants still cause long-term changes to forest composition and function. Many of them have competitive advantages over native plants, including being well-adapted to disturbed environments and having rapid and prolific reproduction potential. Invasive plants can overtop native plants and tree seedlings and some even release chemicals into the soil that prevent germination of other species. 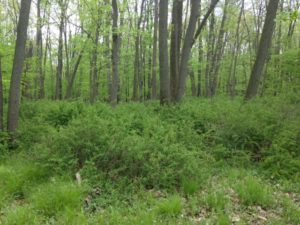 People can take actions to reduce the competitive ability of invasive plants and give our native trees and wildflowers a fighting chance. Follow recommended practices to avoid spreading invasive plants while working or playing in forests.  You can also directly act against invasive plants with a variety of control options, including uprooting by hand or applying herbicides. The DNR has guidance on these options in general and for some species in particular, such as buckthorn.  When planting in your yard, be an informed consumer and avoid planting known invasive plants. This guide includes many of the worst invasive plants in Wisconsin, while this list includes all invasive plants that are addressed by the invasive species rule NR 40. You can find more information and images of each plant at the DNR invasive plants webpage.

Even when invasive species management feels like an uphill battle, as it often does in the case of established populations, landowners and land managers alike must continue to fight the good fight. Eradication may be unlikely, but we can slow down the rate of their spread and reduce many of their impacts. Maintaining Wisconsin’s trees and forests in a diverse and productive state is worth the effort.