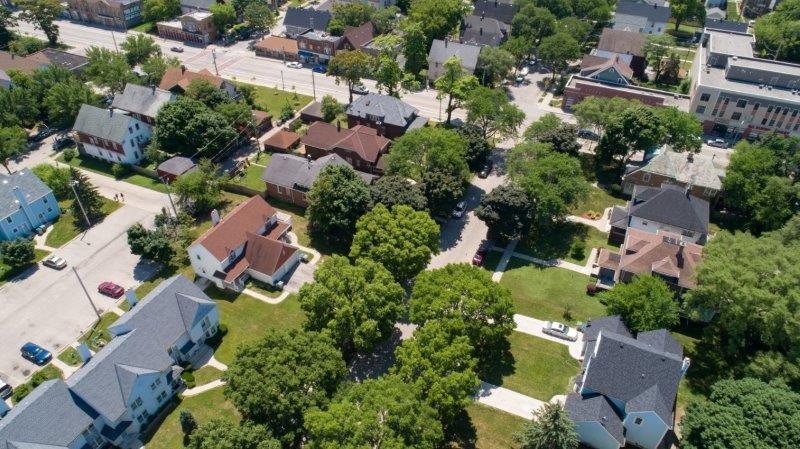 When I returned to my hometown neighborhood in northeast Ohio this past August, I was delighted to rekindle my friendship with so many trees that I have known most of my life. There are, of course, the Norway maples and crabapples and blue spruces found in maintained spaces throughout eastern America. One also finds a fair number of sugar maples and Ohio buckeyes. But despite apparently living in a democracy, red oak is king of my neighborhood.

During this visit, I did something that I don’t always do; I looked down. What I saw concerned me. Or, rather, what I didn’t see. Few trees had been planted in a decade, and fewer still will grow into canopy-replacing size. Windstorms were slowly bleeding the neighborhood of its great oak and maple trees, but there were no longer any kings or queens being coronated.

I observed a similar lack of recent plantings in surrounding neighborhoods, pointing toward a decline in canopy cover. I also noticed something interesting: some neighborhoods with extravagant homes and large lots had a low canopy. Yes, they are newer neighborhoods, but that canopy cover has barely budged in twenty years despite having the space and resources to plant more trees.

What was going on? Well, a case study in Bloomington, Indiana published in 2020, shed some light on the situation. Based on their own research and a literature review, they found that as a neighborhood ages, the tree canopy grows. They also noted that there is most likely a canopy age limit, at which point the mature neighborhood forest begins to decline. That is helpful but does not explain why neither neighborhood seems to plant many trees, especially ones that will become large.

Could it be the age of the homeowners? Results from the Wisconsin Urban Landowner Survey revealed that older generations tend to have more concerns about existing trees than younger generations. Yet, in both the Bloomington paper as well as an unpublished study I conducted in 2018 in Wisconsin, homeowner age was not significantly correlated with canopy cover one way or another.

But there was one broad factor that the researchers in Bloomington identified as having a small but significant role in residential forests that rang true to my hometown observations: formal and informal social values. The authors wrote:

Though not legally enforceable, social mores among neighbors often help define what is (and is not) acceptable in yards and may constrain human behavior because of fear of social censure.

In other words, there are landscaping norms that people follow, even if unconsciously. While I doubt in my neighborhood that there is any stigma against planting any tree anywhere on one’s property (like there might be if you didn’t mow your lawn for a month), there are few people modeling that behavior or showcasing what is possible.

In the neighborhood with huge houses and lot sizes but sparse trees, social norms are likely to occur. But there is an additional factor that might play a role in reducing tree cover and tree diversity: a homeowners’ association. According to the Indiana study:

The presence of rules within HOAs likely establishes a sense of shared responsibilities to a certain yard aesthetic, thus implying that shared norms can play an important complementary role to community rules-in-use. Such rules and norms may also be impacted by legacies imparted by the developer.

But while the authors noted the negative relationship between rule compliance and tree diversity and canopy cover on the other, they also recognized that homeowners’ association rules tend to relate to tree removal practices and barriers to planting. There were no rules encouraging tree planting or species diversification. However, there is great potential for HOAs to have a positive effect on both if rules incentivize the planting of a diverse assemblage (in size and structure) of trees.

All of this is not to dismiss the overarching trends, like higher incomes linked to higher canopy covers, that are increasingly documented. Those linkages are true, and it is good that attention is being paid to areas that might have many problems, though few trees. But I make these observations to highlight that the causes of tree canopy are complicated and sometimes contradictory to preconceptions (e.g., in the Bloomington case study, higher incomes were linked to lower canopy). Your local scenario is unique and demands a local solution.

All of us can play a role in modeling the kind of landscaping that can lead to a more diverse and expansive canopy. In my current Milwaukee neighborhood, large black walnuts are present. Those were probably not planted by humans but by some enterprising and forgetful squirrels, though generation after generation of homeowners accepted those trees into their lives. I am thankful for the legacy they have left me. Whether by our own hands or trusting the work of rodents, we can leave legacies of our own.

If you have thoughts on your own neighborhood tree canopy, I would love to hear them! Email me at daniel.buckler@wisconsin.gov.