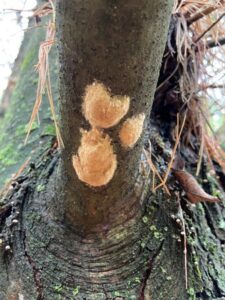 In 2022, Wisconsin’s spongy moth population grew for a third consecutive summer due to favorable weather conditions and limited caterpillar mortality from diseases. The outbreak was most dramatic in opposite ends of the state. In southern and southeast Wisconsin, several thousand oak-dominated acres were heavily defoliated and very large numbers of property owner reports were received by DNR staff. In Bayfield County, about 80,000 acres of rural defoliation was reported from aspen-dominated forests. Smaller patches of defoliation were also reported from several other counties.

It is likely that the outbreak will continue and spread to other parts of Wisconsin in 2023 if weather conditions are favorable. Thus, it is important to examine high-value host trees (including oak, birch, crabapple, aspen and willow) and plan ahead if egg mass numbers predict an unacceptable level of defoliation. A map of quarantined counties shows where the pest is considered to be “generally established.”

Populations typically experience the fastest growth rate and are first noticed on: 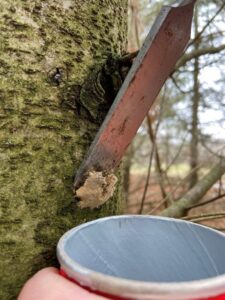 When egg masses are found, treat or remove those safely within reach. Accessible masses can be sprayed with horticultural oil (available online or at many home and garden centers) or gently scraped into a container of soapy water to soak for a few days before being discarded in the trash. Do not use motor oil or other lubricants, as these can harm the tree and be a pollutant. Look to treat or remove “fresh” egg masses produced during the current summer. More egg masses are usually seen if surveys are done once leaves have fallen from the trees. Contact an arborist or forester if many masses are present.

Visit spongymoth.wi.gov for information on egg mass oiling and removal, physical controls and insecticide application to individual trees. An egg mass survey can be done to help property owners and communities predict the level of defoliation next summer, and determine if active management is needed. An aerial spray guide is also available for landowners and groups interested in protecting a larger area of high-value host trees.

Spongy moth identification and management will be part of the Forest Health Review at the Wisconsin Arborist Association’s 2022 Fall Seminar to be held in East Troy on October 11.  More information can be found here.

*A new common name for Lymantria dispar, spongy moth, replaced the prior name of this insect, gypsy moth, in 2022. This change was necessary because the word ‘gypsy’ is an ethnic slur and the former common name equated people with insects. For more information, visit the Entomological Society of America website.