Generally, attention to the planet’s extinction crisis focuses on charismatic animal species. But what about a different branch of life, one that appeals to those with specific interests and expertise (such as readers of this article)? What is the status of America’s trees?

An extensive study published in the journal Plants People Planet documented all tree species native to the contiguous United States and classified their global extinction risk, creating or updating hundreds of species threat assessments. The results provide one of the most comprehensive appraisals of trees across the country, informing not just our expectation of these trees’ future ecological and economic roles but our moral duty as stewards on and for this planet.

The authors tallied 881 native tree species from 269 genera in the contiguous United States; oak (Quercus) and hawthorn (Crataegus) were the most represented genera, with 85 and 84 species, respectively. It is estimated that 11-16% of US tree species are threatened with extinction, mostly native to the southeast, Texas or California. Invasive pests and diseases are the principal threats.

Below are nine species in Wisconsin that are threatened with global extinction, excluding those species without enough data to render a verdict. There are also trees rare in the state but stable or widespread elsewhere. These are captured in the DNR’s rare plant list.

Notably, the study integrated data from both major threat assessment platforms, The International Union for Conservation of Nature (IUCN) Red List and NatureServe. Each platform uses different criteria for a species’ conservation status, sometimes producing strong disagreements between them. For example, the IUCN Red List lists American elm (Ulmus americana) as Endangered because it heavily weighs a species’ widespread and/or rapid decline. In contrast, NatureServe lists the species as Apparently Secure because it is still widespread and reproducing, albeit with fewer numbers and an altered population structure since the arrival of Dutch elm disease. You can see those same differences with the assessment of ash (Fraxinus) species. 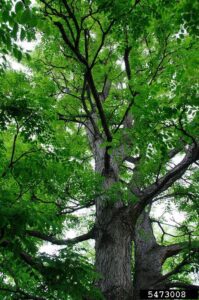 Only one species native to Wisconsin was assessed as threatened in both platforms: butternut (Juglans cinerea). Interestingly for urban audiences, the increasingly popular Kentucky coffeetree was assessed as Vulnerable in the IUCN Red List, reflecting the species’ fragmentation and difficulty reproducing in the wild.

Because of the attention sometimes placed on individual trees, urban areas can be important hosts of otherwise rare trees, preserving those irreplaceable lifeforms into the future. Georgia’s famous Franklin tree (Franklinia alatamaha) has probably been extinct in the wild for two hundred years, though it’s currently grown in hundreds of maintained spaces worldwide. Let’s hope Wisconsin species have more promising prospects than that, but whether planting, protecting or promoting trees, thank you for doing your part.