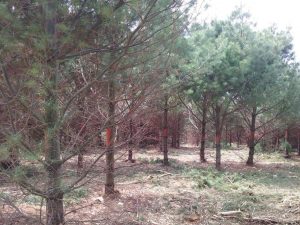 Soon after the beginning of the nurseries in Wisconsin, managers realized they had a special role to play in the development of trees, especially when it came to disease resistance, growth, and form. In conjunction with the UW system, USDA Forest Service scientists and researchers and our own tree geneticist, nursery staff established a number of seed orchards.  Throughout the decades, we have explored and invested in new sites, creating a tree improvement program that is stocked with species in various stages of development and/or characteristic selection.

We have worked with fields of black walnut, red oak, white pine, jack pine and white spruce for many years to find individuals within known families with superior growth, form or disease resistance. The efforts have been rather substantial for white spruce and jack pine; affording us the ability to claim our seedlings have advantages over other, non-selected trees of that species.

In this tradition, we established a white pine plantation on the Northern Highland-American Legion State Forest, just southwest of Lake Tomahawk. The white pine was planted in 2002 with stock selected from 234 trees, representing 50 natural stands during the years of 1996, 1998 and 2000. In addition, the Forest Service provided seed from 142 Forest Service selections in Michigan, Minnesota, and Wisconsin. The goal was to identify individuals within the families that exhibited superior height and diameter growth, form and blister rust resistance. The goals were both short term (to identify white pine seed sources appropriate for use in the state nurseries) and long term (to develop seed orchards for future seed production and genetic resource conservation within the Lake States). After 15 years of growth, the stand was re-measured and individuals that exhibited the previously mentioned characteristics were selected, with most other trees scheduled for removal. More than half of the stand was thinned in May 2016, with the rest scheduled to be thinned this fall.

Our newest established jack pine orchard was established in the Black River Falls area in 2009. This past spring, we measured the trees, scoring for height, form, and gall resistance. The data is being analyzed, with management options to come in the near future.

The third-generation jack pine at the seed orchard south of Wisconsin Rapids continues to grow and develop. However, it has recently been infiltrated by jack pine budworm. The Reforestation Team is working with the Forest Health Team to determine the best course of action to protect the trees.

The investment in research can be substantial. However, this investment in seed orchard management is proven to pay dividends in future years as it lead to higher quality seedling for Wisconsin landowners.