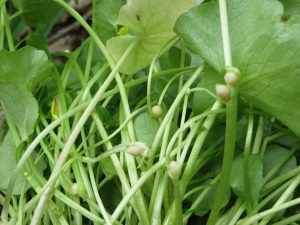 Spherical bulbils of lesser celandine form during the spring growing season. Later they drop off and sprout to form new plants.

Lesser celandine (Ranunculus ficaria), also known as fig buttercup, is a ground layer plant and an aggressive invader of forests in North America. So far, it is relatively unknown in Wisconsin but has been found in the southeastern part of the state, especially in moist (mesic and wet-mesic) forests and along river banks.

Lesser celandine is a spring ephemeral that emerges in early spring, develops flowers, dies back by early summer, and remains dormant in underground tubers. During the short growing period the plant produces bulbils which sprout and give rise to new plants. After the round bulbils drop off they are spread by gravity, water, small animals, and like the tubers, transported when soil is moved. 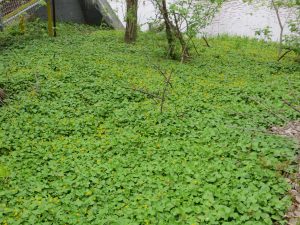 A dense colony of lesser celandine along the Milwaukee River.

We need your help

The thick glossy leaves and small yellow flowers, along with the bulbils, help identify lesser celandine. If you find lesser celandine, DNR wants to hear from you. Submit your report on the DNR website or send an email to Invasive.Species@wi.gov. Photos and voucher specimens are especially helpful.

Lesser celandine has been found in limited urban areas in Dane, Milwaukee, Racine and Walworth counties and control efforts are underway in each.

This plant is classified as a Prohibited species under Wisconsin’s invasive species law NR 40. That means it cannot be transferred (bought, sold, bartered) or introduced in the state. Further, it cannot be possessed and steps must be taken to eliminate the plant from one’s property. The Department of Natural Resources offers assistance to help land owners rid their property of this plant.