Numerous issues are causing various hardwood species to become off-color this summer.  Below I’ve listed a few issues that I’m seeing.  Most of these issues do not require any control or any mitigation if your trees are showing these symptoms. 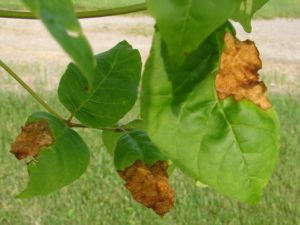 Anthracnose – irregular dead brown blotches on oak leaves and ash leaflets, caused by the fungal leaf disease anthracnose, is making some oaks and ash appear to be browning.  Phone calls with concerns about dying trees have been coming in.  Symptoms are typically worse in the lower crowns, and the ash I’ve seen with this issue in Marinette, Oconto, and Vilas Counties have very thin looking crowns. 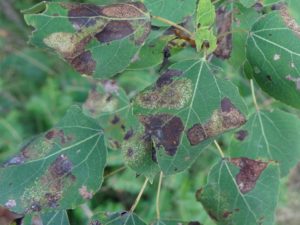 Browning areas on this aspen leaf are caused by aspen blotch miner.

Aspen blotch miner – all ages of trembling aspen are being impacted by aspen blotch miner this year.  Aspen crowns appear thin, leaves appear off-color from a distance, “blisters” form on the underside of the leaf, and eventually the leaves curl and brown of the leaves.  This is the 4th year in a row that I’ve noticed defoliation by this insect.  This year, similar to past years, I’ve seen it in Oconto, Marinette, Florence, Forest, Oneida, and Vilas Counties.  Tiny larvae spend their entire life feeding within the leaf and pupate within the area that they mined out.  Moths emerge in August and spend the winter in a protected place. 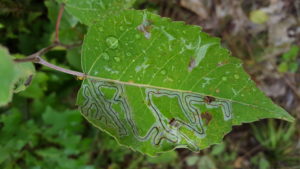 The winding galleries of aspen leafminer make the tree appear grey from a distance.

Balsam poplar browning – a couple of things are going on with the Balsam poplar in Brown and Oconto Counties, including a leaf disease and aspen blotch miner.  The trees are thinnest in the lower crowns, but the upper portions don’t look too hot either. 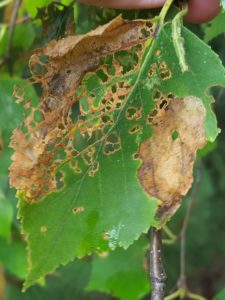 This birch leaf shows both the feeding of Japanese beetles (which don’t eat the veins of the leaf), and a brown blotch where birch leafminer was feeding.

Birch dropping leaves – every year about this time birch will drop a portion of their leaves.  Many of those leaves don’t appear to have much damage on them.  But there is certainly leaf damage if you look closely at birch.  The primary issue that I’ve been seeing this year in Brown, Oconto, Oneida, Shawano and Vilas Counties is from birch leafminer.  Dead blotches on the leaves may make you think anthracnose, but holding the leaves up to the light you will discover you can see through them and see signs of insect activity inside the leaves.

Birch look brown – defoliation from Japanese beetle in Minocqua/Woodruff area is causing the birch to appear tan.  Defoliation is more significant in the lower canopy, but some trees are heavily defoliated top to bottom.  Japanese beetle is something that you may want to do some treatments for.  There are many options for treatments, whether excluding them with netting, or using insecticides against the adults, using traps for the adults, or using insecticides or fungal biocontrol against the larvae.           UW Extension has a great document with more info on Japanese beetle control. 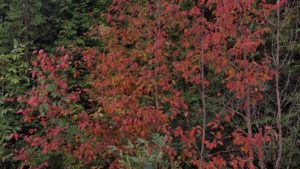 A young black cherry turns red. While some are being defoliated by lacebugs (causing them to turn red), others like this one have very little defoliation.

Cherry lacewing and cherry turning red – I’m not quite sure what’s going on with all of the cherry.  Some of them are turning reddish in color because they are being defoliated by Cherry Lacebug (Oconto County), but others don’t seem to have any damage that I see (Marinette and Oconto Counties), so I’m not sure why they’re turning red.

Maple early fall color – check out Todd Lanigan’s article  which highlights the high water levels that are causing stress to lowland trees.  Many maples growing in these lowlands are already turning a rich shade of red due to water stress. 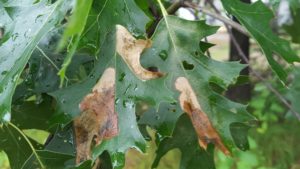 Brown blotches on these oak leaves are not anthracnose. The tiny oak leafminer lives within the leaf, feeding on the leaf material. The damaged area eventually turns brown.

Oak leafminer – in Minocqua/Woodruff area I was noticing some oaks were looking a bit brown, which I assumed was probably anthracnose.  Always good to double check these things!  Once I stopped to check it out I discovered activity from oak leafminer was to blame, causing dead brown areas where the insects feed within the leaf. 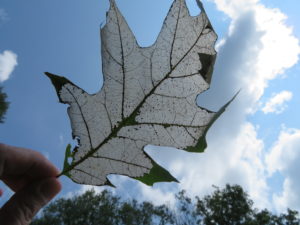 Defoliation by oak skeletonizer will leave a layer of cells, which appear like parchment paper if you hold the leaf up to the light.

Oak skeletonizer – scattered light levels of defoliation have been seen in nearly every county in Northeast and East Central Wisconsin.  Oak skeletonizer defoliates oak leaves by scraping off a single layer of the leaf, leaving a parchment-like layer on the leaf which turns pale tan.  Holding these leaves up to the light makes it clear that they’re defoliated. 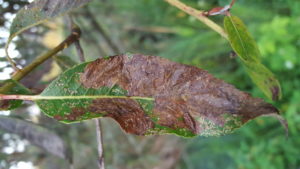 A willow leaf is brown where willow flea weevil larvae have been feeding inside the leaves.

Willow browning – although we started this spring with some willow scab that caused significant defoliation, the current issue is the leafmining action of the larvae of willow flea weevil.  This is the fourth consecutive year that Brown, Calumet, Marinette, Shawano, and Oconto Counties have experienced significant defoliation of willow from this insect.  I’ve also noted this in a few willow in Florence and Langlade Counties this year.