Since the August newsletter, it was announced that six new counties would be quarantined for emerald ash borer (EAB). The find in Chippewa County was due to a vigilant landowner while the other finds were due to trapping by USDA APHIS. 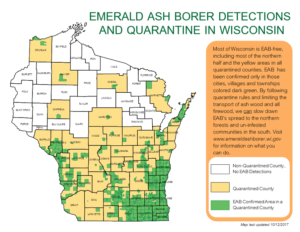 WI counties quarantined for EAB  (DATCP). Most of Wisconsin is EAB-free, including most of the northern half and the yellow areas in all
quarantined counties. EAB has been confirmed only in those cities, villages and townships
colored dark green.

EAB continues to be found in new areas. Wisconsin tracks EAB at the municipality or township level. Quarantined counties are shown in tan; infested areas are shown in green on the map below.