A new Wisconsin Wildcard is available on beech bark disease (BBD).  Wisconsin Wildcards are pocket-sized, collectible informational pieces available at Wisconsin state parks. The BBD wildcard may be viewed here. If you’d like to order them, send a request to Forestry.Webmail@wisconsin.gov (ask for publication no. FR-218x).

Beech bark disease will eventually become a problem wherever beech is found.  The native range of American beech (Fagus grandifolia) extends into the eastern third of Wisconsin. BBD is the result of a relationship between exotic scale insects and a Neonectria fungus. The disease was first identified in Wisconsin in 2009. Currently, the only known area of the state which has experienced mortality from BBD is Door County. 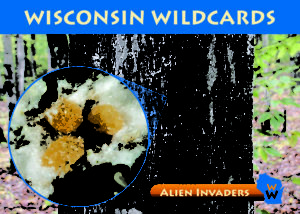 Front and back of the new beech bark disease Wisconsin Wildcard. 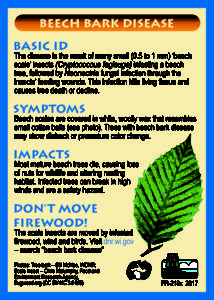 The scale insects feed by inserting their mouthparts through the bark on the trunk and branches and sucking the sap from the tree. The fungus, which “hitchhikes” on the scale insects’ bodies, enters the tree through those wounds.  The tiny scale insects secrete a white waxy protective covering; when scale populations explode and there are millions of scales on a tree, the tree can appear white from a distance, making it resemble a birch tree. As the fungus enters the tree at numerous points and dead spots under the bark (called cankers) form, the tree becomes weakened, leading to a risk of “beech snap.”  Beech snap can occur unexpectedly when the tree still has a full canopy of leaves remaining.  Beech snap can create huge problems for park and campground managers who are trying to keep guests safe; there is no way to predict when a tree is going to fail from BBD. 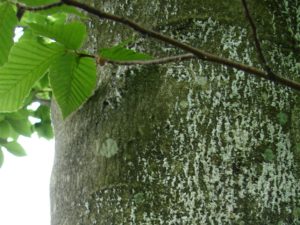 Eventually, the insects and disease take their toll and the beech trees decline and die.  Any age of beech tree can be infested, so in stands with significant beech mortality, regenerating trees will become infested as well as mature ones.  The good news is that three to five percent of American beech trees are resistant to BBD.  Michigan has identified and propagated such trees for a number of years, and have established a seed orchard of resistant trees.  BBD is not yet as established in Wisconsin, but already we’ve been able to identify a couple of resistant trees in the area where BBD has killed many trees.