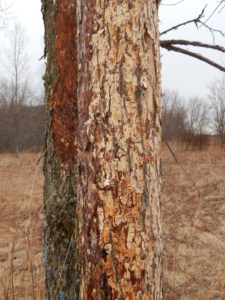 Have you noticed any trees this winter with the bark partially or mostly removed? These trees can stand out dramatically during the winter. Woodpeckers remove outer layers of bark so that they can more easily punch their beaks through the remaining bark to get at the tasty, plump larvae underneath. The three most common trees that you’ll spot this damage on in Wisconsin are elm, tamarack, and ash. So, what’s going on?

On elm, there are three bark beetles of interest. One is a native beetle, and two are exotic species – the smaller European elm bark beetle and the banded elm bark beetle. Adult bark beetles chew their way under bark and lay eggs during the spring or summer. The eggs hatch, and larvae begin feeding in the tree layers under the bark. Going into winter, larvae are plump and delicious (if you’re a woodpecker), and it’s these juicy morsels for which the woodpeckers will strip the outer bark from the tree, sometimes starting at the ground and working all the way to the top. Elm trees will often appear a rich red or burgundy color when outer bark is removed. The U.S. Forest Service offers a document with additional information on elm bark beetles, as well as photos of each of them. 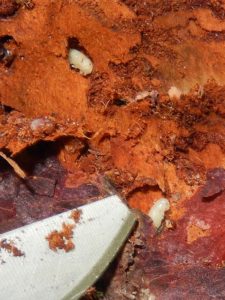 Close-up of tamarack bark, showing the larvae of Eastern bark beetle at the tip of my (broken) knife. Woodpeckers remove the outer bark to make it easier to access these tasty morsels.

Tamarack trees (often referred to as larches) are attacked by a bark beetle as well. Eastern larch beetles attack stressed tamarack trees, although sometimes the stress is so minor that it’s not easily identifiable. The wet weather we had throughout the 2017 growing season definitely stressed some of tamaracks in Wisconsin; having roots in fully saturated soils for too long a period when the tree is actively growing can cause root mortality. Tamarack that have had the outer bark stripped off will appear dark red in color. More information on eastern larch beetle from the U.S. Forest Service can be found here. 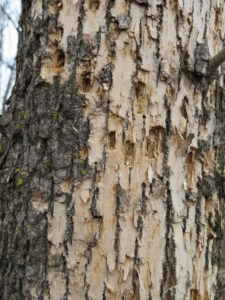 Ash bark with pale areas where woodpeckers have removed outer layers of bark, as well as some small rough holes where the woodpeckers punched through bark and plucked out a nice plump EAB larvae.

Ash trees with the outer bark removed may be infested with either emerald ash borer or a native ash bark beetle. When woodpeckers remove outer bark of an ash tree, it makes the tree look very pale. Emerald ash borer populations build up to very high numbers as they move into new areas, which provides a great source of food for woodpeckers. A study published in 2012 showed that woodpecker numbers can increase due to the presence of EAB.

What about other woodpecker damage that you see on trees?

Pileated woodpeckers are large birds that can do a significant amount of damage to trees. The good news is that they tend to target trees that are dead or have a lot of decay in them. That’s not

to say that they won’t occasionally peck into a healthy tree, but the insects they prefer to feed on are more common in dead or severely stressed trees, or trees with a lot of decay in them. Pileated woodpeckers have tongues containing backward facing barbs that they can stick into an insect gallery to drag out the occupants for a meal. They can leave a pile of good-sized woodchips at the base of trees that they’re feeding in. The photo shows an example of the damage that they can do.

Sapsuckers are birds that drill orderly rows of holes through the bark of trees. The holes go through the bark to the cambial layer, causing the tree to “bleed” sap. Sapsuckers return to feed when the sap is flowing. Sapsuckers’ tongues have little hairs on them to help gather sap. Sapsuckers are migratory and may just pass through an area in the spring, but they will sometimes return to the same tree over multiple years, creating new rows of holes each year. Trees will attempt to grow over this damage, and are usually successful, although the damage to the bark may remain visible for many years. Loggers may note this damage when cutting logs; it is referred to as “bird peck”, and is considered a defect. Federal regulations prohibit people from killing sapsuckers, so control for yard trees is usually some manner of deterrent such as wrapping the main stem with hardware cloth or burlap, or using scare tactics in the tree. 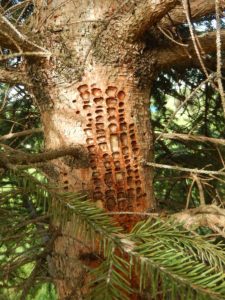 Orderly rows of holes created by yellow-bellied sapsuckers. These birds will revisit these holes that they drill and lick the sap that flows from them. 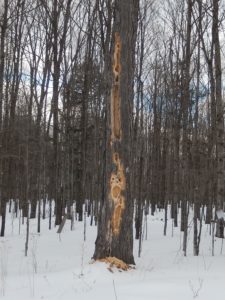 Damage from pileated woodpeckers can be quite extensive. A single woodpecker can create this level of damage in a few days, or it may work at a tree throughout the season. Note the pile of large woodchips at the base of the tree.