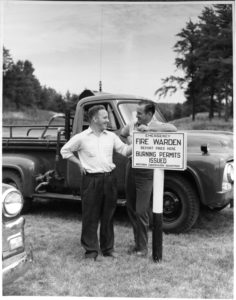 Men and women from all walks of life volunteered to become emergency fire wardens; farmers, shopkeepers, mechanics, teachers, tavern owners, loggers, paper mill employees, retired couples and many others.  In addition to fighting fires, they were asked to issue burning permits and keep track of who was burning and where, in case a fire was to get out of control.

When issuing burning permits, the fire warden would likely offer a few safety tips, talk about the weather and maybe add in a friendly joke or two.  They shouldered a huge responsibility in the communities they served by being the eyes, ears and voice of fire prevention in Wisconsin.  At that time, burning permits were valid for several days from the date of issuance and while this system worked, it did endure some challenges.

Fast-forward several decades to an era of organized fire protection and multi-media.  In 2008, changes were made to the burning permit system, requiring only one burning permit for the calendar year.  Then, a simple phone call or check online to determine if burning is safe on the given day in the county where the burning will occur.  Due to enhanced technology, the number of permits issued drastically decreased (from 100,000+ permits to less than 60,000 annually) and therefore, it was determined that the residential EFWs would be retired in 2012, but the business-based EFWs would remain. 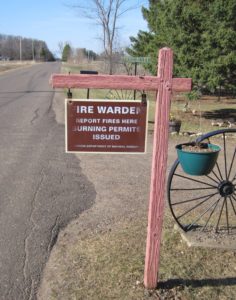 With more customers turning to the internet to obtain burning permits, the DNR has reduced the fire warden workforce by nearly half.

In 2014, an extensive evaluation of the burning permit system and the EFW program was conducted to evaluate the effects of the residential EFW reductions, the value of the continuing business-based EFWs and the criteria for further reductions.  Historical fire report data, a survey of all existing business-based EFWs, internal fire control focus groups and a public survey of burning permit consumers were key elements to support the decision to again further reduce the EFW work force to three business-based EFWs per county by the year 2020 (not including DNR offices or partner EFWs such as fire departments, town/municipal offices or USDA-FS offices).

In 2017, the DNR issued over 33,000 burning permits online and anticipates this trend will continue to rise.  Recognizing that the computer is not for everyone, there is also an option for customers to obtain a burning permit over the phone by calling 1-888-WIS-BURN (947-2876) from 7 am-10 pm daily.  The permit can then be instantly emailed or mailed by postal delivery.  In addition, any DNR Service Center or ranger station can issue a burning permit in-person.

The DNR still maintains over 300 EFWs statewide, however, this number will likely decline over the coming years.  For a current list of DNR emergency fire wardens by county, visit dnr.wi.gov, keyword ‘fire warden.’ Or, better yet, get a burning permit right now by going HERE!