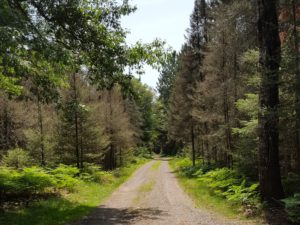 In many areas this summer, damage from spruce budworm (Choristoneura spp.), a native insect, is less noticeable than in past years. Although heavy defoliation is evident north of St. Germain in Vilas County and at a site in Shawano County, only light to moderate defoliation has been seen in other areas. Light defoliation was observed in Bayfield, Florence, Forest, Marinette, Oneida, Shawano, and Vilas counties. Defoliation was less predominant last year as well, probably because of unusually heavy rainfall in spring 2017 which led to an increase in tree growth. This year’s spring was also unusually wet, resulting in increased tree growth.

Spruce budworm outbreaks typically last about 10 years; the current outbreak began in 2012. The last two years of exceptionally robust tree growth may help some of the damaged trees to at least partially recover. Since 2012, some areas of northeastern Wisconsin experienced three or four years of heavy defoliation; affected trees are either dead or declining despite good growing conditions.