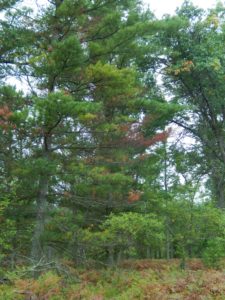 Branches in the mid- and lower-crown of this white pine are being killed by white pine bast scale and a fungal disease. Photo: Linda Williams

White pine bast scale and canker fungus has been identified in two sites in Oneida County. This insect/fungus complex is a new issue in the state; those who work with white pine should be alert for signs and symptoms. 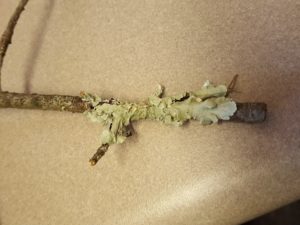 Bast scales hide underneath lichens and insert their straw-like stylets into tree branches to feed on sap. Photo: Linda Williams

The fungal pathogen Caliciopsis pinea causes small cankers, which are dead spots in the tree’s tissue, to form in inner bark of trees; many cankers can develop on each branch. As more cankers develop, affected branches will eventually be unable to move water into foliage, which will die. It is believed that Caliciopsis pinea is associated with white pine bast scale, although other factors may be involved when branch mortality is present.

This insect/fungal disease complex was observed in pole-sized white pine in the northern part of Michigan’s Lower Peninsula in 2016; it was first found in Wisconsin in 2018. Branch mortality due to the combination of white pine bast scale and the Caliciopsis pinea fungus typically begins on lower branches. Soon symptoms appear higher in the tree, and eventually whole branches die. White pine bast scale by itself has not previously been known to cause problems in white pine. 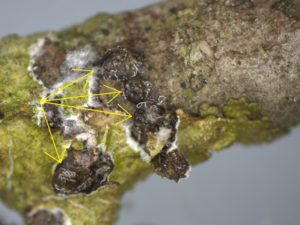 Yellow arrows show where four tiny bast scales were hiding under a lichen, removed to expose them. Photo: Linda Williams

At this time, there are no management recommendations. Look for further information in the Forest Health News as it develops.