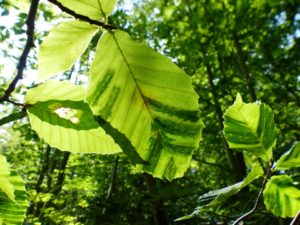 Early striping from BLD as seen looking up into the canopy. Photo: The Ohio State University.

Although beech leaf disease (BLD) has not been found in Wisconsin, forest owners and managers should keep an eye out for it on American (Fagus grandifolia) and, to a lesser extent, European (Fagus sylvatica) beech trees. Beech leaf disease is becoming a serious issue in parts of Ohio, Pennsylvania, New York and Ontario. Its cause is not yet known.

Look for the appearance of striping or banding on several leaves of an otherwise healthy-looking tree. Striping, the result of darkening between leaf veins, is most apparent from below when looking up into the canopy. The darkened leaf area is raised and slightly thicker than the rest of the leaf tissue. As BLD progresses, lighter, chlorotic striping may also occur. Striping is present in the spring when trees first leaf-out. Very little premature leaf drop has been seen.

In later stages of BLD, heavily shriveled, discolored, and deformed leaves can be seen clustered near branch tips, and there will be reduced leaf and bud production. Most buds will be small and only weakly attached to twigs. Mortality may occur, mainly in saplings. 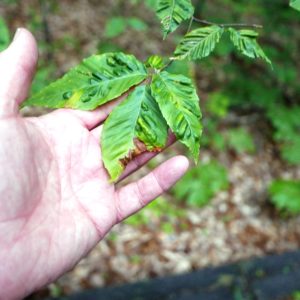 Beech leaf disease is believed to spread rapidly, although its progression does not appear to be influenced by slope, aspect, or soil conditions. In areas where BLD is established, nearly 100% of American beech trees eventually display symptoms. Affected trees are usually left vulnerable to attack by a wide variety of other insects and pathogens, including beech blight aphid, European beech scale, erineum patches produced by eriophyid mites, and leaf fungi such as anthracnose.

If you observe symptoms of BLD on American or European beech trees in Wisconsin, please contact your regional forest health specialist.