The recent frigid temperatures in late January and early February are likely to kill many overwintering emerald ash borer (EAB) larvae, but the tree-killing pest isn’t going away. The insulating properties of tree bark keep the larvae warmer than the outdoor air temperature, and wind chills do not affect the larvae because they are sheltered. The pest is also adapted to subzero temperatures based on its native range in eastern Asia where cold winters are common. 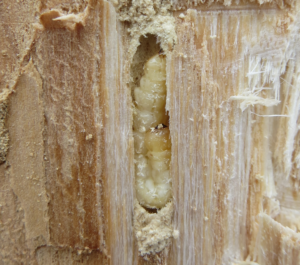 On the morning of January 31, many parts of Wisconsin had low air temperatures between -30 and -35 degrees F. In places where it was this cold, scientific studies predict that most EAB larvae will be killed. Where low temperatures were between -20 and -30, larval mortality is likely to be lighter. Overwintering larvae were examined about 1 week after the cold snap in Brookfield (Waukesha County), where the low was -26, and few of the larvae were observed to have physical signs of freezing damage. Many of the larvae began moving within three days of being brought indoors. However, physical damage to the larvae may not yet be apparent, and normal-looking larvae may ultimately die from the cold temperatures.

Populations of the pest are likely to rebound, since each female beetle that emerges this summer will lay as many as 200 eggs. It is not currently known if larval mortality will significantly delay ash tree decline and mortality, although this may occur in areas that experienced the lowest temperatures. A cold spell in early 2014, that was not quite as cold, had no noticeable impacts on EAB spread or ash decline/mortality in areas known to be heavily infested.

The introduced biological controls of EAB, commonly known as “EAB wasps,” are at least as cold-tolerant as EAB. It is expected that these wasps will persist in and around release sites and continue parasitizing EAB eggs and larvae.

Forestry experts do not recommend changing EAB management plans solely due to the cold weather.