Defoliation from larch casebearer (Coleophora laricella) is showing up in some areas of northeast and northcentral Wisconsin. The defoliation is patchy and of moderate intensity, resulting in trees with various degrees of browning due to the insect’s feeding habits. Some appear pale yellow or brown throughout the crown while others only have partial browning. 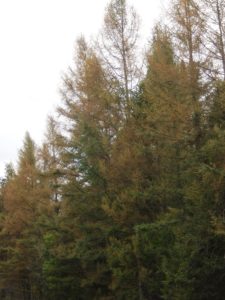 Defoliation by larch casebearer will cause needles to turn yellow then brown. Trees will usually send out more needles and be green again by mid-summer.

Larch casebearer overwinters in the caterpillar (larval) stage and can start feeding as soon as the weather warms up in the spring. The caterpillars mine out the needles of tamarack, leaving just their outer shells and causing them to turn brown by late spring. The mined-out needles are used as a protective home, with the larvae bearing the needle case around with just their heads sticking out for feeding. 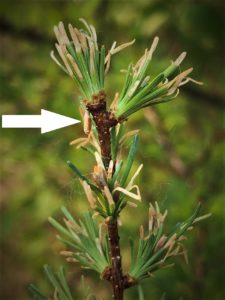 The tips of these larch needles have been mined out by larch casebearer. The white arrow points to a caterpillar in its case that was moving along the stem to feed on new needles.

Tamarack trees will typically produce a new set of needles following moderate or severe damage and will be green again by mid-summer. Caterpillars pupate on the tree in early summer and emerge as adult moths that mate and lay eggs for the rest of the season. A second round of feeding, which can cause additional stress to the trees, occurs by young larvae in late summer before they overwinter. Repeated defoliation can weaken the tree, making it more susceptible to mortality from eastern larch beetle, a bark beetle that attacks and can kill tamarack.