Site visits and aerial surveys conducted in parts of Wisconsin during July and August have found that tree decline and mortality were common in numerous lowland forest stands. 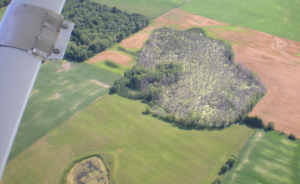 Heavy tree mortality in a Manitowoc County lowland site where standing water was present on July 31. Note the surviving trees on higher ground and in adjacent stand. Credit: Bill McNee.

It is the third consecutive year where standing water has been present well into the growing season. Many locations where standing water, premature color change and tree mortality were reported in 2017 or 2018 now have heavy mortality. However, nearby wet sites appear to have little or no aerially-observable mortality this year. Small differences in elevation, drainage patterns, tree vigor, etc. may account for the difference.

According to the State Climatology Office, cumulative precipitation in Wisconsin this spring and summer (March through July) has been several inches above average. The resulting inundation period at the very wet sites is believed to have extended pre-existing tree stress from previous years. Even tree species that are tolerant of seasonal inundation, such as silver maple, are experiencing decline and mortality. There have also been some reports of cattails growing in wet sites that are currently forested or that were previously forested by smaller ash and elm.

In northeastern Wisconsin, some low-lying areas that were dry for 12-15 years are now back to being wet, and the trees that were adapted to the drier conditions are now dead or dying. Even tamarack, another species well-equipped for living in wet areas, has been observed with flooding stress and mortality.

If you manage or work with wet sites, it would be worthwhile to pay them a visit and see if you need to alter management or do any salvage harvesting. Note: emerald ash borer is likely present in some of these stands and could be responsible for a portion of the observed decline and mortality on ash.