Snow fleas are a species of springtails that are active during winter and are generally found in groups where their dark-colored bodies stand out against the white snow. While often observed in late winter or early spring, they also come to the surface on warm winter days, making an early December appearance in west central Wisconsin something to note but not altogether unusual given the relatively warm weather in the area. 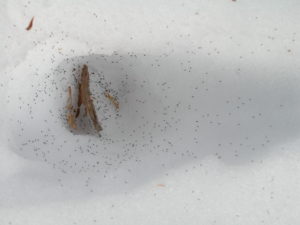 Easily mistaken for specks of dirt or debris, snow fleas are tiny soil-dwelling animals that gather on the surface of snow on warm winter and spring days.

These small animals are small, around an eighth of an inch long, and wingless. They crawl around on the snow slowly but can “spring” forward rapidly and move three to four inches in a single movement. A unique, fork-like structure called a furcula folds under their bodies, and when released allows the snow fleas to jump. They can’t control the distance or direction of their travel, but this mechanism remains useful for avoiding predators.

Snow fleas live in humid environments, including soil, leaf litter, under bark and in decaying logs. With diets consisting of decaying vegetation, fungi, bacteria, pollen, algae, lichens and insect feces, snow fleas help break down organic matter and release nutrients back into the soil. They provide these services in many settings, including forests, lawns and gardens.

Snow fleas are not related to true fleas nor do they bite, sting or otherwise cause harm to animals. If you are outdoors on a warm day this winter or spring, keep an eye out for these unique creatures and enjoy watching them in action!