Wet weather in 2019 created ideal conditions for Rhizosphaera kalkhoffii and other needle cast fungi to infect spruce needles. Since it takes about a year for the needles to show symptoms, heavy and widespread needle diseases are expected to be seen on spruce trees in 2020. 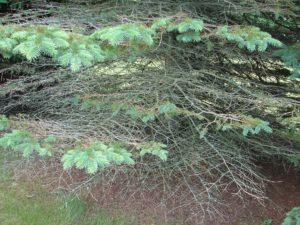 Loss of older needles on an infected spruce.

Needle cast diseases cause older needles to turn brown and fall off prematurely, making the tree look ratty and sparse. Lower branches and the interior of the tree are most affected by needle cast diseases. Current-year needles do not show symptoms but may become infected.

Rhizosphaera needle cast is the best-known of these diseases, but another fungal disease known as Stigmina needle cast, caused by Stigmina lautii, has also been common and causes the same type of symptoms. Microscopic examination of infected needles is required to distinguish the two from one another.

If timed properly, preventative fungicide applications this spring can protect newly-emerging needles from showing disease symptoms in 2021. However, these treatments will not protect already-infected needles. A certified arborist may be able to provide assistance.

It may be worthwhile to replace or remove chronically-affected trees, since they will probably have these problems for much of their remaining life. More information about Rhizosphaera needle cast disease can be found in this factsheet from  UW-Madison Extension.